Hand it to the University of Georgia: They are masters of their art, and that art is piddling tiny crimes in large quantities. If you're in the market for a garden-variety DUI or a mundane moving violation, you know who to call. I have to say, however, that six misdemeanors in one incident is pushing it, even for the Dawgs:

Dontavius Jackson, 20, a backup running back, was charged with six misdemeanors: driving under the influence of alcohol, underage possession of alcohol, following too closely, leaving the scene of an accident, violation of the move-over law and violation of learner’s permit.

Tavarres King, 19, a starting wide receiver, was charged with underage possession of alcohol.

How the notoriously citation-happy UGA police didn't somehow also come up with a way to charge Jackson with mail fraud is anyone's guess, but the chain of events that led to these charges is an Aristotelian confluence of events that could only happen under their watchful gaze:

[UGA Police Chief Jimmy Williamson] said two patrol cars were at an unrelated traffic stop when a vehicle — later determined to be driven by Jackson — passed at an inappropriate speed and failed to move over.  As one of the patrol cars began pursuit of Jackson for allegedly violating the move-over law, a third officer put out a radio report of an incident moments earlier in which a vehicle had left the scene of a minor accident. The description of the vehicle that allegedly left the scene of the accident — a Chevrolet Avalanche — matched the one being pursued for the move-over violation, Williamson told the AJC.

"It just happened that our officer was behind that vehicle when the third officer put the  information on the radio," he  said.

Credit where credit's due: Dontavius Jackson, that's what we call finishing the drill, although a viewing of the MythBusters episode with the breathalyzer test might have done you some good: 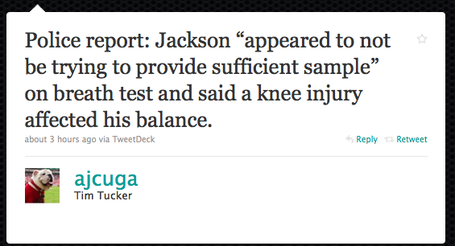 Both players are currently serving the requisite indefinite suspensions for alcohol-related tomfoolery, and SB Nation Atlanta ponders what this means for the future of Georgia's drinking-arrest-prone football program:

[If] Evans' arrest did have anything to do with the severity of the discipline meted out to Jackson and King, two questions are worth asking. The first is whether Jackson, like Evans, will "lose his job" as a result of all this -- backup status plus laundry list of charges equals a regrettably easy opportunity to make an example of someone by kicking him off the team entirely, particularly when he's already written off half the upcoming season. But the second and more salient question is whether Evansgate may have inadvertently signaled a significant beefing-up of team discipline as it pertains to alcohol charges. This wouldn't be the first time that's happened -- ironically enough, Evans' tenure as AD included the "10-percent rule" mandating specific suspensions for athletes charged with alcohol-related offenses -- but it could be one of the toughest

For more on this and all your Georgia football needs, visit DawgSports and SB Nation Atlanta.