After rumors percolated all afternoon on Monday, on Tuesday, Al Jefferson is the newest member of the Utah Jazz, and everyone else is wondering: What the hell is T'Wolves president David Kahn thinking?

Kahn has been shopping Jefferson all offseason, and he likely knows the value out there. If it's this bad, that it's worth only cap space and a pick package from a good team, then don't trade Jefferson! Selling low wrecks portfolios, and to be honest, Minnesota's asset list is sparse enough already. If the team really needs to clear this cap space to sign, I don't know, Luke Ridnour, then don't sign Darko Milicic to a $20 million contract! Don't trade for Martell Webster the same day you draft Wesley Johnson! Don't help the Heat assemble a championship team by trading for Michael Beasley when you have Jefferson and Kevin Love on your roster!

And wouldn't you know it? Minnesota will use the cap space they just created with the Jefferson trade to sign...

That's yet another point guard for a roster that's teeming with them, and the Wolves are still waiting on Ricky Rubio, the point guard sensation that's supposed to play savior to this mess.

Meanwhile, the T'Wolves just traded their best player for a remarkable 10-cents-on-the-dollar. With Jefferson's departure, Minnesota now has zero players on their roster leftover from the trade that sent Kevin Garnett to Boston, and perhaps worse, zero direction for the future. KAHHHHHHHHHHHHHHHHHHHHHHHHHHHHHHHN.

If the NBA management is the World Series of Dice, David Kahn is... 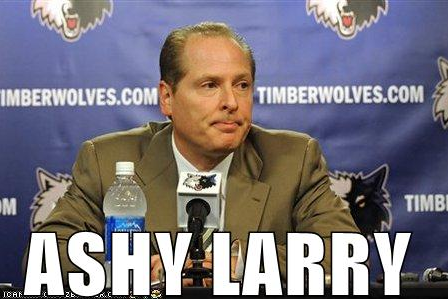