This is nice of Dan Gilbert. In yet another open letter to the fans of the Cleveland Cavaliers, Gilbert announced that while Cavaliers fans have offered to pay his $100,000 NBA fine (after his scathing letter regarding LeBron James landed him in hot water), Gilbert can pay it himself.

As he wrote (in Comic Sans, natch): 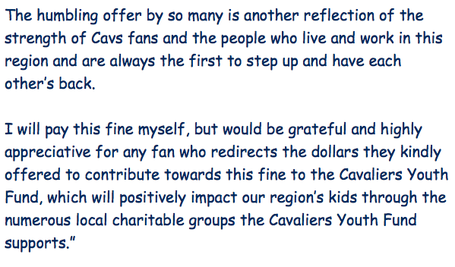 How kind of the Cavaliers billionaire owner not to accept the donations of Ohioans in a struggling economy to pay a fine that he earned with a completely self-indulgent, over-the-top, heat-of-the-moment rant toward a 25 year-old basketball player.

As he wrote of LeBron James, "Some people think they should go to heaven but NOT have to die to get there." Now, ask yourself: doesn't Dan Gilbert deserve heaven after this?

No? Because this is a press release where he talks of completely anonymous donation offers that may not even exist? Designed solely to curry favor with fans, making a point to prove Gilbert's sentiments were NOT completely extreme and out of bounds? That's what this is?