Rush Limbaugh: George Steinbrenner Was A Cracker That Helped Black People... Or Something Like That

Share All sharing options for: Rush Limbaugh: George Steinbrenner Was A Cracker That Helped Black People... Or Something Like That

So, yeah: it's definitely possible to hate everyone in a given story.

And it's that sort of confusing, comprehensive contempt—where we spin in circles, spewing hate at the dizzy enemies that emerge from all sides—that reminds me of Rush Limbaugh's entire career. Who's his bogeyman now?

The recently-deceased George Steinbrenner, of course. Or black millionaires. Or white guys that deserve to get fired?  This quote makes me dizzy:

"That cracker made a lot of African Americans millionaires. And at the same time he fired a bunch of white guys."

There's Rush talking about Steinbrenner, just hours after the 80 year-old Yankees owner had suffered a massive heart attack and died. Isn't that awesome? ... No, that's not very awesome.

And I think he was trying to compliment Steinbrenner? It's unclear. As SB Nation New York points out, it's baffling that millions tune in on a daily basis to listen to this buffoon.

But hey! Bet you didn't think it was possible to be racially condescending, to two separate races, in the same sentence, while eulogizing someone. That sort of feat calls for a victory cigar! 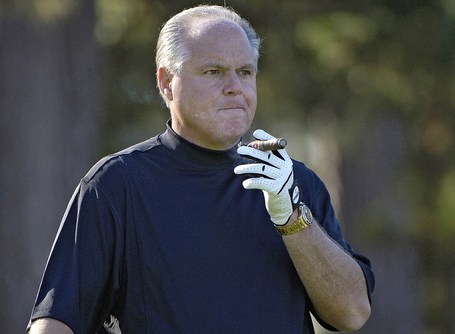