The NBA Summer League is littered with talented players trying to find their way onto an NBA roster. SB Nation will profile several of these players throughout the week. Next up: Coby Karl of the Denver Nuggets.

In the NBA Summer League, there are tons of players who are so close to securing a spot on an NBA roster, but just haven't gotten the opportunity. SB Nation will profile many of these players in our "On The Cusp" series. Today, we'll talk about Coby Karl, who is playing for the Denver Nuggets' Summer League team.

Imagine, for a second, if Coby Karl's name wasn't ... Coby Karl. Imagine if he was just another wing player on the fringes of the NBA instead of being the son of Denver Nuggets coach George Karl.

I bring this up because you'd think it would help him. With so many wing players trying to make it to that next level, having such an important family connection has to be one way to distinguish yourself. It's how it works in pretty much any other profession.

In Coby's case, though, I think the opposite has happened. People - whether it's fans, NBA teams or both - see the last name and make the assumption I just made. They look at his connections rather than his game. They look at Denver's decision to sign Coby to a non-guaranteed contract for training camp last April as a ceremonial move rather than one that could pay dividends for the Nuggets down the road.

Coby's father couldn't help but admit this perception is out there.

"It's been a hard thing," George says. "I think sometimes, I've held him back from making the league.  But he's had a good run and he still loves the game. He's got to make a decision whether to try to make the NBA and maybe go to the D-League, or go to Europe this year."

For his part, Coby says he's used to those whispers because "I've had that stigma my whole life." He also believes he's done enough even to this point to silence the doubters.

"I've proved myself on many different levels, so it makes it a little easier for [Denver] to say ‘Oh, he's a good enough player to play on the Summer League team or even on the regular-season team,"' he says.

But now that he's playing for his father, those whispers could potentially grow louder. If so, that's too bad, because Coby continues to turn heads here in Las Vegas. 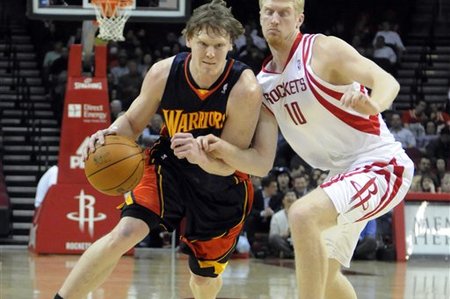 If you're one of those people who only knows Coby Karl as George's son, let me try to fill in the blanks. After starring for four years at Boise State, Coby went undrafted in 2007. He hooked on with the Lakers, who were then a rag-tag group of Kobe Bryant and not much else, and played so well in training camp that he made the 15-man roster. He spend the 2007/08 season shuffling between the Lakers and the Los Angeles D-Fenders, their NBA Development League affiliate, and was actually on the roster during the 2008 Playoffs.

Karl went to Spain for a year, honing his skills for a year as a member of Joventut Badalona. Then, he nearly had the big break he needed.

After starring in the 2009 Summer League, Karl finally got the call he wanted from the Cleveland Cavaliers to attend training camp. The Cavaliers had a surplus of wing players - Delonte West, Daniel Gibson, Anthony Parker, Jamario Moon, Jawad Williams and, of course, LeBron James - but with West's legal troubles, suddenly, they needed Karl. Once again, Karl was impressive enough in training camp to make the NBA roster.

But once again Karl didn't stick. West came back, and none of the other Cavaliers' wings suffered injuries early in the season. With his spot blocked, he was relegated to practice duty, and the Cavaliers eventually released him on January 6, one day before his contract was to become guaranteed.

Now, after a short stint with the Golden State Warriors and the D-League's Idaho Stampede, Coby once again needs to prove himself enough to stick in the NBA.

"With the way the league is right now, roster spots are very difficult to find," George concedes. 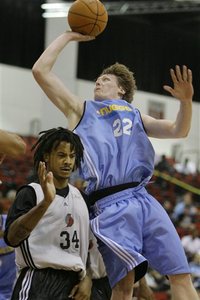 It's the Nuggets third game of Summer League, and for the first time, Coby's shot is working. He hits a couple early three-pointers, converts on a couple free-throw attempts, and suddenly, he's in double figures before the first quarter between the Knicks and the Nuggets ends. He isn't touching the ball much, because of the presence of Ty Lawson, but he's making his opportunities count. He finishes the game with 22 points, seven rebounds and four assists as the Nuggets roll to their third straight win.

It's not like Coby has played poorly to this point - far from it. In fact, the most impressive thing about Coby's first two games is that he managed to score double-figure points even without his perimeter shot falling. It's just that Coby's jump shot is the one thing that may have held him back in the past.

Coby adds that his number one emphasis is making his jump shot more "consistent," and George does say that his shot has improved over the years.

But what's most impressive about Coby's performances this summer is that he's succeeding while blending in with his teammates. Coby came out of college as a playmaker ("I played the 1/2, 2/1 in college," he says), but in the NBA, there are enough playmakers. The players that do climb from the fringes of the league are usually ones that find a way to succeed without controlling the ball.

"It's a tough league in terms of shooters, because a lot of times, you don't touch the ball a lot. Your scorers are going to have the ball a lot, so you have to be ready as a shooter. It's a very hard thing to do and only a few have mastered it," Coby says.

This year, Coby is mastering it, averaging 14 points on just 6.8 shot attempts per game. When he gets the ball, there are no wasted motions. He doesn't need three seconds to gather himself and make a move. He just makes it.

And when he chooses to drive to the basket, viewers are treated to the familiar sight of Coby picking himself off the floor as he prepares to go to the line. Coby won't ever be mistaken for being the most athletic guy in the room, but he's averaging nine free-throw attempts per game, a staggering number even for Summer League. Coby admits he's picked up some tricks as he's bounced around the basketball world.

Coby's defense has also been very impressive, in ways you probably didn't notice. Like all those times he fronts New York's young prospect Bill Walker, preventing him from even receiving the ball in the spot he likes. Walker ultimately shoots just 6-14 as Coby forces him into tough shots and doesn't let him get to the free-throw line.

Add it all up, and NBA teams have a player who is not only talented, but has figured out how to use those talents to better his team. When asked why he thinks he deserves to make an NBA roster, Coby simply states that he "knows how to win basketball games." His father, who ultimately will be the one to decide Coby's future basketball fate, takes it a step further.

"He's got one of the greatest assets you can have: making people play good basketball," he says. "He knows how to play, and because of how he plays, the game kind of has a flow to it.  He makes good players better and he makes bad players good."

One need only watch the Nuggets' struggles in their fourth Summer League game on Wednesday, a game in which "veteran" guard J.R. Smith replaced Coby for a cameo appearance and shot 2-12 in a Nuggets loss, to see what George means.