Have you ever wondered what writer you resemble most? No? Then you're clearly not a writer. You should congratulate yourself for that decision. Because writers—bound by neuroses and narcissism—wonder about this question all the time.

There's a new website that can answer this question for us, taking writing excerpts and draw a comparison to famous writers.

But rather than focus on ourselves, we figured, why not put a celebrity to the test? Enter Chris Johnson of the Titans. Running back, Twitter-extraordinnaire, ESPY-winner, and potentially one of the most egregious cases of swagger-jacking of all time. 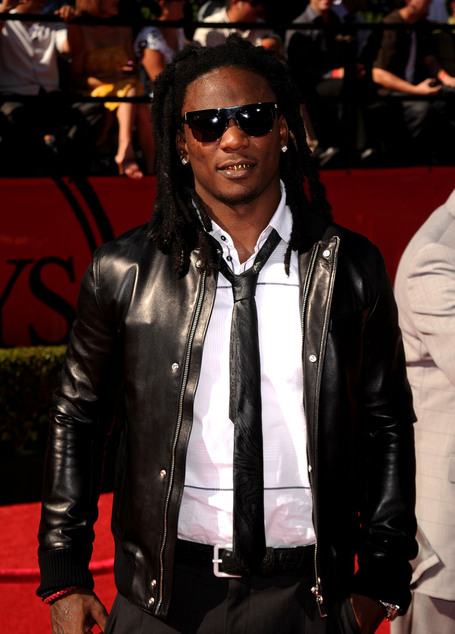 Anyway, what writer would Chris Johnson be? Here are the tweets we entered:

I'm on my punk rock swag at the espy leego  ... I'm wearing just a tank top under my vest tonight my alter ego tattoo dan be wit the BS ... Boy I need a number 1 from McDonald's with a hi c orange ... Boy if miami get lebron I might have to become a heat fan ... Shoutout to Kevin Durrant for gettin a new long term deal after 2years shout out to his team they lookout. ... They say ever since I ran for 2k I'm not hungry no more. I reply u DAMN RIGHT I graduated from HUNGRY to GREEDY.

I Write Like by Mémoires, Mac journal software. Analyze your writing!

Agree? Disagree? I think it's fair to say this website is calling Dan Brown illiterate, or at least impossible to understand. Or maybe they both just write with a certain... emphasis?

They say ever since I ran for 2k I'm not hungry no more. I reply u DAMN RIGHT I graduated from HUNGRY to GREEDY. #FEELFREETOHATEless than a minute ago via ÜberTwitter

Either way, it's nothing against Chris Johnson. If anything, it's a reflection on Dan Brown, he of several multi-million dollar book deals, and apparently the literary equivalent of a Chris Johnson tweet. Again, not that there's anything wrong with that...