FIFA.com Club Members got the chance to vote for their World Cup All-Star Team and on Thursday the results were released.  Six Spaniards made the lineup and only five countries in total were represented. 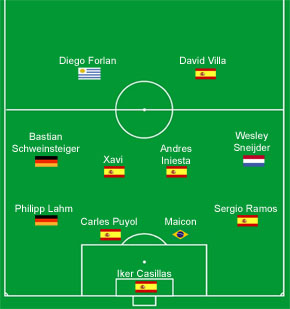 Although it's hard to argue with any player that made this team, like every All-Star team that is determined by fan voting, there were notable snubs.  The most obvious, to me, is Thomas Muller of Germany who won both Best Young Player and the Golden Boot finishing the World Cup with five goals and three assists but missed the semi-final match against Spain due to suspension.  It's hard to dispute the four defenders that were selected - even though three of them are wing backs - but there are a hand full of backs who deserve recognition given how low scoring the group stage was in South Africa.  The Netherland's Giovanni van Bronckhorst and Brazil's Lucio immediately come to mind as well as Ghana's John Mensah.

Check out Daily Soccer Fix where Steven Davis has put together his Best XI from South Africa.