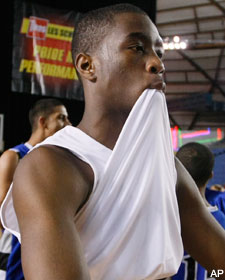 Other than the occasional NC Pro Am showdown, most of the fun in the college hoops world at this time of the year is relegated to recruiting circles. Thankfully, even if you can't make it to big events like the Peach Jam where the nation's top AAU teams are facing off, you can still get some great day-to-day coverage via Twitter. Folks like Dave Telep and others are killing it on the recruiting trail, so they're worth a follow. But sometimes you want the info straight from the horse's mouth, which is why we're thankful for frequent Twitter users like Tony Wroten (right) and Quincy Miller. Wroten is a 2011 class member from Renton, Washington. Scout lists him as the No. 6 shooting guard. Rivals lists him as the No. 26 player overall in the class. Miller needs no introduction if you've been reading TSB. We wrote about him a few weeks ago when he locked up the gold for the U.S. U18 team. Both players broke some recruiting updates on Twitter over the last few days. â†µ

â†µFirst up, Wroten gives an update on his process: â†µ

â†µâ‡¥I Have NOT committed anywhere yet. But UK is in the lead right now. Then comes UW,Uconn,Nova â†µ

â†µThat grinding sound you hear? That's the collective teeth of every Washington basketball fan. Losing Wroten to Kentucky would be one giant helping of salt into the wound opened up by Enes Kanter and Terrence Jones choosing the Wildcats. (Kanter and Jones were both set to play for UW at one point.) It would also make Kentucky all the more terrifying in 2011-12 as Wroten would potentially join Mike Gilchrist and Marquis Teague in Lexington, two of the top five players in the nation according to Rivals. â†µ

â†µNext up, we've got Quincy Miller dropping a list that sent a few fans into a frenzy: â†µ

â†µ... and then roughly an hour later, he re-posted that list with an addition. â†µ

â†µOK, so let's step back and clarify a few things. OSU is Ohio State, not Oklahoma State. Also, Miller probably should brush up on his abbreviations, because he used BYU as a way to reference Baylor. (Sorry, Cougars fans.) â†µ

â†µIf you're looking to follow some of the nation's best players, check out the Team USA Twitter lists for the U18 and U17 players. â†µ