UNC, hardly the highest-profile program even in the slow-zombie ACC, suddenly finds itself under some adorably nebulous investigation by the NCAA for possible violations within the football program:

"I can acknowledge that representatives from the NCAA have been to Chapel Hill to speak with some of our student-athletes," UNC athletic director Dick Baddour told Inside Carolina on Thursday afternoon.

"One of the things that they instructed us in very clearly is that we are to maintain the confidence of their visit and their review. They’ve requested that we not discuss it publicly. Obviously, we’re going to fully cooperate with the NCAA in every way that we can by making things available to them and in particular by following their instruction on discussing it publicly."

And that's about all we know so far. Joe Schad, whose sources range from "somebody's cousin" to "the internet", delivers this delightful bon mot: 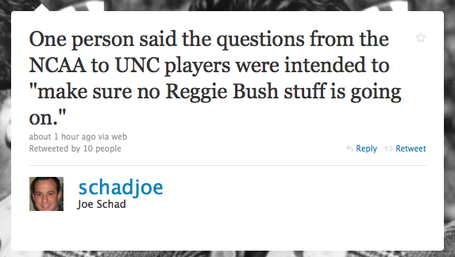 By "Reggie Bush stuff," we're going to assume they don't mean "presiding over a period of unquestioned conference domination."