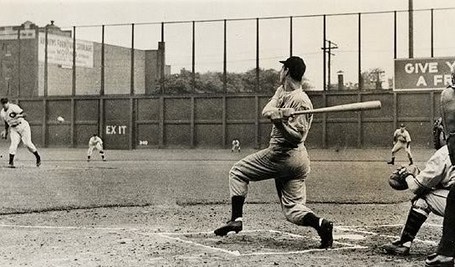 (Joe singles off the tribe's Al Milnar to get to 56 straight. Photo courtesy of AP Photos)

Yankees slugger Joe DiMaggio gets three base hits in a game against the Cleveland Indians. It extended his consecutive-games-with-a-hit streak to 56 games, a full dozen past the previous record held by "Wee" Willie Keeler. Just one day later, in a rematch against those same Indians, the New York Yankees won, 4-3 -- but DiMaggio went 0-3 thanks to a pair of great defensive plays by Indians third baseman Ken Keltner.

"I wasn't thinking about [DiMaggio's] streak when I made those plays," said Keltner, who would later describe DiMaggio as the greatest player he ever saw. "All I was concerned about was winning the game because we still had a chance [in the pennant race]." The Yankees won 41 games, lost 13, and tied twice during Joe's streak, and they would later run away with the American League pennant.

But the streak was over. At 56 games, DiMaggio had carried the hit record to a seemingly-insurmountable mark; to this day, it remains the most ever in MLB history. Immediately following that game, DiMaggio got a hit in 16 straight games, meaning that he hit safely in 72 of 73 games and had safely reached base in all of them.

"I'm not happy that I failed to get a hit," he said after the game. "I guess relieved would be a better word. Although I haven't been under much strain, there always was a little pressure until I got a hit." A then-record nighttime crowd of 67,468 had come out to watch him extend it to 57. Had he done it, the Heinz 57 company would have given him a $10,000 endorsement.

DiMaggio's 56-game streak became one of the most idolized numbers in baseball and joined Babe Ruth's home run records, and later Wilt Chamberlain's 100-point game, as the most hallowed records in all of sports. Whenever any player recorded a hit streak in the mid-thirties, still twenty short of the record, that player would receive an immense amount of coverage from the media. That's how enormous Joe's record was.

The San Diego Evening Tribune reports that the San Francisco Warriors will play half of their home games on the 1972 schedule in Oakland, with the other half to be played in San Diego. With the team moving out of San Francisco, it was also reported that the team would be changing its name to the "Golden State Warriors," so as to identify with both the cities of Oakland and San Diego.

As it turned out, the Warriors only played six games in San Diego that year, and then switched to playing in Oakland full-time. But they kept the "Golden State" name anyway, making them the only team in the NBA to not include their city or state in their name (although California's state motto was "the golden state.") The team would also change their logo, which was supposed to compensate for the confusion some fans had when they asked, "Where do the Golden State Warriors play?" The Warriors' new logo featured the outline of California, and had a blue star positioned on the edge of the state where the bay area was located.

As unique as it was, the Warriors weren't the only Oakland sports team to go this route. One year earlier, the Oakland Seals of the NHL changed their name to the "California Golden Seals." Besides dropping the "Oakland" from their title, the Seals had also moved out of San Francisco. In 1976, the Seals moved out east and become the Cleveland Barons, where they lasted for two seasons before folding. 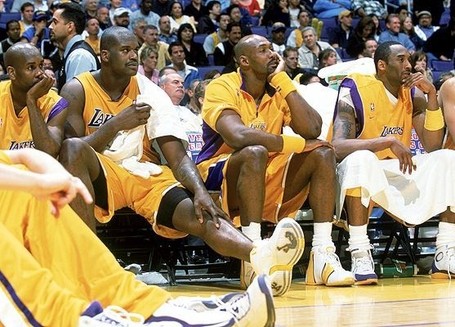 After 18 years with the Utah Jazz, Karl Malone signs with the Los Angeles Lakers for one last shot at a championship. John Stockton, his tag partner for close to two decades, had just retired, leaving the 40 year-old Malone with no viable reason to stick around in Utah. Malone signed a two-year deal with the Lakers and made only $1.5 million that year -- a sacrifice he was willing to take.

"It would've been easy for me to stay in Utah and make 10 or 11 million and get the scoring record," said Malone, who needed 2,014 points to pass Kareem Abdul-Jabbar for the all-time point record. "But I think I was holding a lot of guys back from getting their careers on track, so I made the decision to go to L.A. It was a financially costly one, but I don't look at it like that at all."

The addition of Malone was huge news, though he was not the only future Hall of Famer Los Angeles inked that day. Also joining the roster was point guard Gary Payton, who had spent his first 12-and-a-half years in Seattle before spending half a season with the Milwaukee Bucks. Like Malone, Payton signed for cheap in the hope that he could final wear a championship ring.

Within an instant, people started referring to the 2003-04 Lakers as the 1927 Yankees of the NBA. With Shaquille O'Neal, Kobe Bryant, Gary Payton and Karl Malone, it didn't appear that anything could stand in their path. And when the team got off to an 18-3 start, it looked like all the hype had been worth it.

However, there were some major issues with the team, particularly when it came to getting along. Kobe Bryant's season was marred by charges that he sexually assaulted a woman in Colorado, and his schism between Shaquille O'Neal grew wider than ever before. At multiple points in the year, O'Neal and Bryant publicly traded insults at each other. Bryant also called out coach Phil Jackson, who he described as hard to work with. Malone, who had only missed four games due to injury in his previous 18 years, missed half the season thanks to a nagging injury. And Payton, for his part, bickered about Jackson's triangle offense and complained that he wasn't getting enough playing time.

For all the tension that existed on the Lakers' roster, L.A. was able to placate it for the common goal of winning a title. The Lakers scrapped their way into the 2004 NBA Finals, where they met up with the Detroit Pistons. Los Angeles was an enormous favorite over the upstart Pistons. But in one of the largest upsets in league history, Detroit crushed the Lakers in five games and won the title that the Lakers had been eyeing for 11 months.

Malone did not return for another season and finished 1,460 points behind Abdul-Jabbar.

[For the record, I would have written about DiMaggio on July 17, because the day that he didn't get a hit was more relevant than the last day he got one. But a lot of stuff actually happened on July 17, and not a whole lot -- comparatively -- happened on July 16, so I wrote about it here so as to spread it out better. Again, not that anyone reading this is remotely interested.]