James Gammon (Lou Brown From 'Major League') Passes Away At 70

Share All sharing options for: James Gammon (Lou Brown From 'Major League') Passes Away At 70

Sad news from the world of Hollywood today, as iconic character actor James Gammon has passed away at the age of 70. As the Orlando Sentinel notes, Gammon had been battling cancer for the last few years, and his latest recurrence would prove to be his last.

Gammon was in such classics as Cool Hand Luke, Silverado, and Urban Cowboy. But in the sports world, he'll be forever remembered as the gravel-voiced (and exquisitely moustached) manager of the Cleveland Indians in the classic Major League.

We tried finding video from the movie to post in honor of Gammon, but as it turns out, there's no decent video on YouTube from that movie, save one heavily edited clip that revels so completely in profanity that we're not even going to link it. Plus the MPAA would probably sue us for at least 17 million dollars.

So instead, we'll post a publicity still from the movie after the break. Everyone's in their uniforms and just pretending to be baseball players and everything, but it's a little bit poignant all the same. 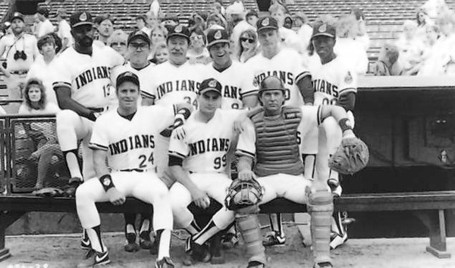 (via the Orlando Sentinel and Mirage Enterprises)

See? Even with the full knowledge that these men were never real baseball players at all, just having these guys in the same uniform and smiling for a black-and-white feels kinda right, right? At any rate, go find your copy of Major League--you do have a copy, right??--and enjoy the movie in Gammon's honor tonight. Rest in peace, good sir.