Last month, the entertainment site Best Week Ever noticed a pattern of ESPN making references to their parent company Disney's properties in their headlines. For the record, the "to infinity and beyond" reference for the marathon tennis match was inspired, and the "Party in the USA" reference for the Landon Donovan goal against Algeria was insipid. Up to speed? Good.

But an unheralded South African golfer crushing the competition at the British Open? Surely, ESPN must shelve the animated film references and actually report the sports as sports here, yes? Well, no, because Louis Oosthuizen is not a supermodel, and that means he has a nickname, and here we go again. 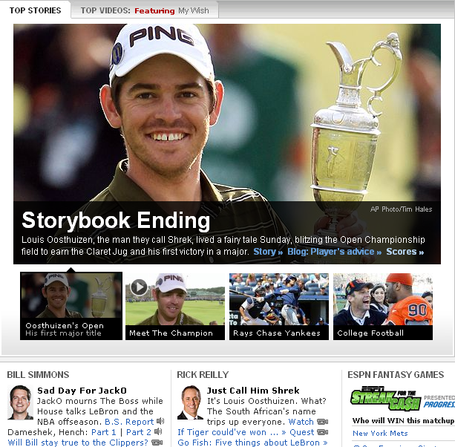 Now, our more astute readers are probably thinking, "Aha! Disney owns Pixar, but Shrek is a DreamWorks release!" And this is true. However...

On February 9, 2009, DreamWorks entered into a long-term, 30-picture distribution deal with The Walt Disney Company by which the films will be released through the Touchstone Pictures banner over the next five years.

This leads us to believe that both studios are actually secretly part of the same company, and that the good final products get put under the Pixar banner and nominated for Academy Awards, while the lame ones get the DreamWorks label and a cover with the DreamWorks Face. This would be a surprise to, say, these companies' board members and shareholders, but we're going to go ahead and believe it anyway.

(UPDATE: A helpful reader e-mailed and reminded us that DreamWorks Animation "is a separate, publicly traded company from DreamWorks." DreamWorks Animation, unlike DreamWorks, is distributed by Paramount. Of course, that doesn't mean anything we said up there is false; it just means that the truth is even more horrifying than we felt comfortable talking about before. FBI, CIA, reverse vampires, spiders with bat wings, they're all involved. We've said too much.)