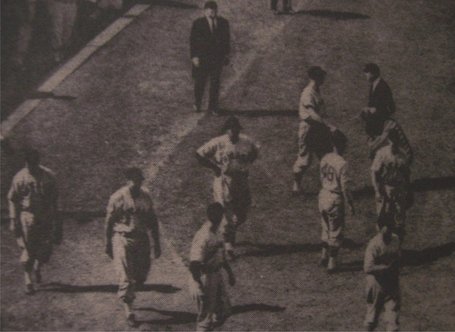 The events that transpired in Boston's 9-2 victory over the Chicago White Sox have been the subject of controversy since it occurred on July 19, 1946. All 14 players and coaches on the Chicago bench were ejected by umpire Red Jones, and legend has it that it was all caused by a ventriloquist in the stands.

In the top of the third inning, Chicago pitcher Joe Haynes came in high and tight with a fastball to Ted Williams. Jones issued a warning to the Sox pitcher, which sparked an argument from the Chicago dugout. One voice continued to chide the umpire, so Jones ejected the quiet Ralph Hodgin. He was not the culprit, and Jones ejected three more White Sox. The other players began to pipe up and complain. Jones, to make absolutely sure he was rid of the heckler, ejected everyone in the White Sox dugout.

The players futilely argued with Jones before making their way back to the clubhouse. Manager Bing Miller offered his glasses to Jones, saying, "You need 'em more than I do."

Play resumed with every possible antagonist ejected. Or so Red thought, for within a few seconds a voice rang out, "Hey meathead, let's see some hustle before the home folks!"

In 2006, the New York Times published an article indicating that the heckler was Sox bench coach Mule Haas. A Ralph Schoenstein article in 1963 was used as evidence; the column stated that, "After the bench had been cleared, Red heard one lone tenor voice that still insisted he was a meathead. He went to the dugout and saw a big windbreaker hanging in the corner. Protruding from it were two feet with spiked shoes. He grabbed the windbreaker from the nail, uncovering Mule Haas, a White Sox coach."

Third baseman Dario Lodigiani added his testimony that it was Haas, although other living players from that game disagreed. It's hard to navigate the truth when the witnesses of history are either senile or dead. But it appears as though a coach and not a ventriloquist led to one of the most single-game ejections in baseball history.

In his 20-year career, White Sox shortstop Luke Appling made seven All-Star teams and collected 2,749 hits, enough to place him in the Hall of Fame. But no amount of All-Star selections could compete with the notoriety he received in 1982, after hitting a home run at the Cracker Jack Old Timers game at RFK Stadium.

Facing off against a 61 year-old Warren Spahn, Appling belted the pitch from the Hall of Famer to the left field stands, 250 feet from home plate. While the smaller configurations of the stadium, which had not been adjusted for a baseball game, certainly helped, the fact that the 75 year-old Appling had hit it out was unbelievable. He had hit only 45 home runs over the course of his career, and that was when he was in his twenties and thirties. At 75, he was the oldest man playing in the old timer's game.

"Funny thing about that homer," he said a month later, "I only took three swings in batting practice. First pitch goes off the end of the bat and the next two off the fists. Thought I'd broken my thumb, so I stopped right there. On the pitch from Spahn I was just trying to get the bat out front. I didn't want to hit it off my wrists."

Appling died in 1991 at the age of 83. For many people, the lasting immage of Luke Appling was as a 75 year-old home run hitter, and not a 30 year-old singles hitter.

About two hours before the start of a double-header between the Mariners and Orioles, the games are officially postponed before fans can enter the stadium. Four tiles from the ceiling of the Seattle Kingdome had fallen to the stands, leaving officials to declare the site unsafe. The dome, which was considered a technological marvel when it opened in 1976, was built to prevent interference from Seattle's ubiquitous rain storms. As it turned out, the tiles had fallen to the ground because of the stadium's bad roofing system, which had taken on too much water.

As each of the Kingdome's 40,000 tiles were individually replaced, the stadium was temporarily shut down. The M's played their next 20 games at the road team's stadium, and might have set the record for the longest road trip had the season not been canceled in August. (For the record, the 1935 A's, who played 32 consecutive road games, hold the record). Upon hearing that his team's "home" series with the Red Sox would be played in Boston, Ken Griffey Jr. quipped, "Don't we have to play in a neutral stadium? How about Tampa? We'll be there in '97 anyway."

The Mariners were already discussing moving the team if a new stadium could not be built, and the tile fiasco made things much worse. It was bad enough to play in an obselete venue, but to play in an arena that was falling apart? Almost a month after the tiles dropped, two workers sandblasting the underside of the tiles fell 250 feet to their death when a crane basket collapsed.

The Seahawks played all their preseason games and three regular season games at Washington's Husky Stadium. The Mariners very likely would have moved in 1997, when their lease with the city of Seattle expired. However, the following year was a renaissance for the Mariners, who won their division and advanced to the American League Championship Series. The city's renewed interest in the team prevented the Mariners from moving; by 2000, the M's were playing in a newly-built Safeco Field, while the Seahawks moved to Qwest Field in 2002.

Tampa Bay was given an expansion team in 1995. In 2000, the Kingdome was demolished to make room for Qwest Field. It became the first dome stadium to be imploded and was the first live event ever broadcasted on ESPN Classic. 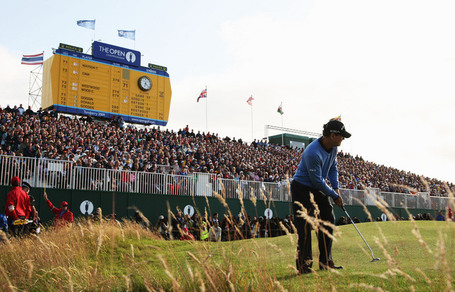 From 2008 to 2009, the sentimental underdogs had trouble pulling off wins at any of the major golf tournaments (pre Y.E Yang). At the 2008 US Open, Rocco Mediate -- who hadn't won a tournament in six years -- had the opportunity to beat Tiger Woods. At the '08 British Open, 53 year-old Greg Norman had a chance to win his first major tournament in 15 years. And at the '09 US Open, David Duval, the former No. 1 player in the world who had dropped all the way to No. 882 in the world rankings, was tied for the lead on the second-to-last hole. All three lost in heart-wrenching fashion, though none of them compared to the disappointment that took place at the 2009 British Open.

In a tournament so difficult that even Tiger Woods missed the cut, Tom Watson, at age 59, emerged as the leader of the pact after one day. People were quick to discount Watson's chances of winning, but the senior citizen did not fade away. He was still atop the leaderboard after the second round, was still No. 1 after the third round, and was even leading for most of the final round. After 17 holes on the final round, Watson had a one-shot lead going into the final hole.

All he needed was a par to complete the most miraculous win in golf history. In his hayday, Watson was right there with Jack Nicklaus and Arnold Palmer as one of the best golfers in the world. But at 59, he was a regular on the senior tour and hadn't won a major tournament in 26 years, or any tournament for eleven years. If he could pull off the victory, he would have easily become the oldest person to ever win a major, would have tied Ben Hogan and Gary Player with nine major wins, and would have won the Open Championship a record six times.

But to the immense disappointment of everyone watching, it was not to be. His second shot on No. 18 went past the green, and his following shot still placed him ten feet from the hole. With the tournament on the line, Watson hit his par putt too lightly, and the ball died well before it reached the hole. Watson tapped in for a bogey, putting him in a tie with Stewart Cink at two-under. They then played a four-hole playoff, in which Cink completely dominated the deflated Watson. Cink finished six strokes better than him and claimed the championship trophy for the first time in his career.

"It’s been a surreal experience for me," said Cink, who in contrast birdied the 72nd hole. "Not only playing one of my favorite courses and a wonderful tournament, but playing against Tom Watson. This stuff doesn’t happen. I grew up watching him on TV, hoping to follow in his footsteps, not playing against him."

"It was fun to be in the mix again, having kids who are my kids’ age saying, ‘What are you doing out here?’ It was nice showing them you can still play," Watson said. "I'm sure I’ll take some good things from it. But it’s still a disappointment."

"It would have been a hell of a story, wouldn’t it?" he added. "And it was almost. Almost. The dream almost came true."

A Dome for All Seasons, But Not for All Time [New York Times]