On Sunday, the Giants' Travis Ishikawa tied the game with a pinch-hit, two-run single in the bottom of the ninth. Then two batters later, he scored on an infield grounder. Yay, San Francisco wins! Mets lose! Everyone drive home safely!

But ... no. Home plate umpire Phil Cuzzi called Ishikawa out, ignoring the seemingly obvious fact that he was in fact safe (watch video of the play at MLB.com). For further evidence, see here: 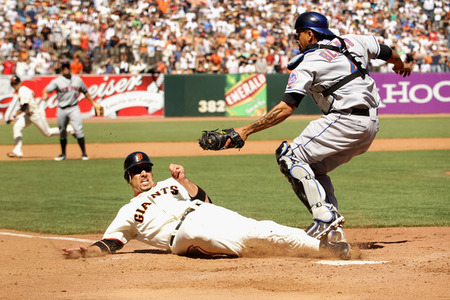 Now, obviously umpiring is not an easy job. It never is, with many calls coming down the difference of split seconds or fractions of an inch. And after the game, even Ishikawa was quick to defend the Cuzzi, saying, "I saw the replay. It was a lot closer than I thought it was. (The umpires) have a tough job to do. For them to have as many close plays to the naked eye that we never can tell, they're mostly right. Today, it felt like we came up on the short end of the stick."

Unfortunately, it was Cuzzi's post-game comments that are not sitting well with fans.

Cuzzi said that he had not yet seen the replay. "I'll look at it, but I figured I'd eat first,” he said, laughing. “He made a decent attempt to put the tag on him. That’s what it looked to me, and that’s why I called him out.”

Indeed, "made a decent attempt" is not the best defense after you've blown a call, and a game. But it was hardly the only instance of Cuzzi's general incompetence, and it was not even the umpire's first highly controversial blown call of his career (see also: Joe Mauer's fair ball ruled foul in the 2009 ALDS). SB Nation Chicago says this is just another example of why baseball desperately needs replay now, and even proposes their plan.

It's the right time for replay in baseball. Here's a very simple, but effective system. Add one member to each umpiring crew; the "fifth umpire" sits in the press box with replay monitors (and also serves as official scorer, taking that job away from retired sportswriters, who never should have had it in the first place). This umpire would be part of the regular umpire rotation, giving each umpire a "break" from base or ball and strike duty.

On plays like this, replays could be asked for by managers or the other umpires. Like the NFL, evidence would have to be conclusive on video to overturn a ruling on the field. In the case of yesterday's play, it would have, since the photos and video are completely conclusive.

Review would be limited to: home runs (which are already subject to replay), fair/foul, trapped/caught fly balls, and safe/out plays like the one yesterday and the one on June 3. Ball/strike calls would not be included.

The proposal may not be ideal (I foresee problems asking the same man to decide between a hit and an error, and then going out and calling balls and strikes the next day), but the point remains: if calls like the one Sunday in San Francisco continue to happen -- calls that could be easily corrected -- then baseball may likely be forced to introduce replay to the game.