Even with an impending lockout, the UFL is doomed to fail

Share All sharing options for: Even with an impending lockout, the UFL is doomed to fail 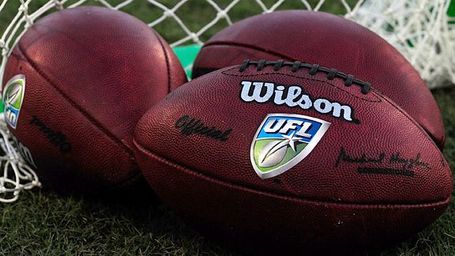 After little to no fanfare and coverage, the United Football League wrapped up its inaugural 2009 season with less than impressive results. The TV ratings were nonexistent, the attendance was minimal and most media outlets didn't even bother to even mention the outcome of the league's championship game, which happened to include a game-winning overtime field goal. ESPN.com doesn't even list the league in its "All Sports" section, an infamous distinction considering even lowly sports such as rugby, cricket, lacrosse, bass-fishing and the Arena Football League get a shout-out from the worldwide leader.

But that hasn't stopped the UFL from being optimistic. "In many ways, it was a dress rehearsal for us," Michael Huyghue, the league's commissioner, told the Las Vegas Sun in November of 2009. "The way a show opens on Broadway with previews and then opens to the full cast. That’s what it was for us. It was a way to take a fairly well-buttoned up process and look at it more closely in sort of a test audience.

"It gives us good comfort in going forward with our full launch in 2010," he added.

If the UFL has anything going for it, it's that the NFL players are virtually guaranteed to be locked out of the 2011 season, giving the UFL center stage of the professional football world -- albeit just in 2011. But even if that happens, that doesn't necessarily mean that the league will become immediately viable. If the product the UFL puts out is lousy, NFL fans are more likely to turn to other major sports, such as basketball or baseball, than they are to support a lousy, watered-down imitation of the NFL. If the UFL's product is good on the other hand, the increased exposure from the NFL lockout could be just the kick-start the league is looking for.

So, some may ask themselves, what is the fate of the UFL? Is there any way it can do the unthinkable and directly compete with the NFL on a long-term basis? Is there any chance of it being considered a legitimate, professional sports league? The obvious, anticlimactic answer will be revealed after the jump... (if you haven't already read the title) 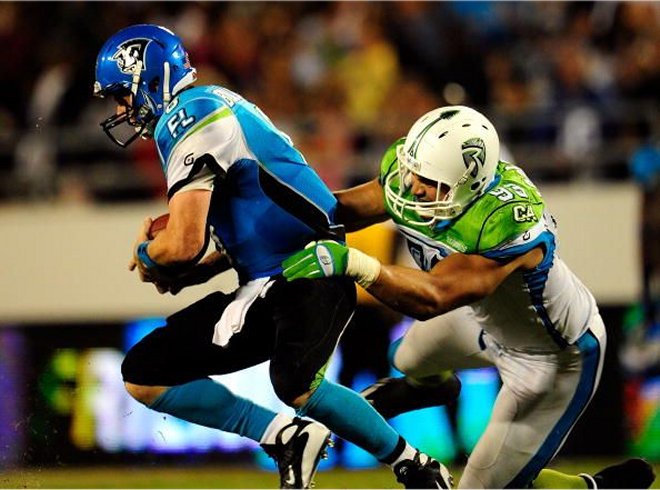 Before I stomp on the hopes and dreams of that one UFL fan out there (whoever you are, here's your shout-out), it's worth noting that the league isn't totally inept.

The league has rolled out a few improvements as a part of its "full launch" for the 2010 season. Each team will now have individual color schemes and uniform designs, and will play full-time in their designated city. This is a huge upgrade from last year, when all the teams were forced to wear almost identical -- and terrible-looking -- uniforms in an effort to roll back costs. Giving the teams a more consistent setting will also help build a fanbase; barnstorming isn't necessarily a bad thing when a team stays in-state, but some teams were doing the opposite. The "New York Sentinels," for instance, played their four "home" games in four different cities and three different states: New York, New Jersey and Connecticut.

The UFL also plans to unveil a stronger marketing campaign this year, and even though last year's TV ratings were abysmal, they're not in any financial danger because everything they did was on the cheap. Not being bankrupt may not seem like much of a consolation prize, but when it comes to building a sports league, being able to withstand years and years of initial setbacks is vital.

The UFL has a myriad of issues going against it, aside from the fact that the talent level of the league isn't even in the ballpark of the NFL. (But that's natural for an up-start league, and if the NFL really goes away in 2011, a slew of Pro Bowlers could wind up on UFL rosters -- again, if only for one year.)

The principle problem with the UFL is finance. The league is operating on a very thin budget, and instead of going full throttle against the NFL, they're approaching the mighty giant like a snail in a blizzard, buying their time and hoping upon hope that the NFL goes on hiatus in 2011. The reason the American Football League was able to succeed was that its team owners were extremely rich and extremely committed to owning a football team, to the extent that they didn't mind losing millions and millions a year if it meant having one. The UFL owners, on the other hand, are made up of small-fries such as Paul Pelosi (Nancy Pelosi's husband) who only bought into the league as a novelty, and aren't fully committed to grinding it out for years and years.

As proof, consider that the league's two flagship franchises -- the New York Sentinels and the California Redwoods -- were both forced to abandon their big-time markets in order to continue existing: the Sentinels moved to Connecticut and became the Hartford Colonials and the Redwoods became the Sacramento Mountain Lions.

The number of teams is another issue. The league has only five franchises, and because of the odd number of teams, each club will have two byes during the course of an eight-game schedule. Without a team in either New York, Los Angeles or Chicago, the UFL has limited itself to the markets of Orlando, Hartford, Omaha, Sacramento and Las Vegas -- giving big-market cities no reason whatsoever to pay attention to it. And even if you were a Florida Tuskers or Omaha Nighthawks fan, consider how monotonous it'll get to watch your team play the same four teams over and over again, with an extra bye to boot.

Perhaps the most daunting challenge is that the UFL is actually competing head-to-head with the NFL. Conventional wisdom would have had the league playing games in the spring or summer, when there are no NFL games to speak of. But by playing their games at the exact same time as the NFL, the UFL is practically forcing viewers to choose only one league to follow. And since 99% of sports fans would rather watch the 32-team, more-talented, better-produced National Football League, the UFL has gone out of its way to alienate as many potential viewers as humanly possible.

Which brings me to the final, whopping issue with the UFL, which is that its television contract with Versus and HDNet is downright lousy. It's true that the role of the big four networks has been greatly diminished over the years, and that it's not impossible for a sport to succeed on cable. But if you want your sport to get noticed, it's necessary for that sport to at least be on a basic cable channel such as ESPN, ESPN2, USA, TNT or TBS. Versus may become a serious challenger to ESPN in the future, but at the moment it's a second-tier, poorly-carried network that only airs sports that ESPN, frankly, doesn't care about -- sports like hockey, even more obscure bass-fishing, even more obscure blackjack tournaments and the Tour de France.

Neither channel is in nearly enough homes to give the UFL the outlet it desires, and if fans have to go out of their way just to find the channel it airs on, the sport will never have a chance to grow. Say what you will about the XFL, but it had everything in place to be a successful league. It had television contracts with NBC, UPN and TNN (AKA Spike), and managed to get a 9.5 TV rating for its opening match on NBC. Viewers abandoned the league once they realized how lame and tacky it was, but the XFL at least had the exposure it needed to potentially become a legitimate league. On Versus and HDNet, the UFL doesn't have a chance.

Here's the reality. Between its lack of marketing, lack of local support, lack of TV coverage, lack of quality players and the insane decision to compete at the same time as the NFL, the UFL did more to destroy its audience than any league in recent history last year.

Here's how atrocious the TV ratings were for the 2009 season: the inaugural UFL game on October 8, 2009 drew just 205,000 viewers on Versus. And if you think that paltry number grew as the season went on, think again. Viewers steadily ignored the league to such an extent that the lowest-rated game of the season just happened to be the overtime-decided championship game between the Florida Tuskers and the Las Vegas Locomotives. That game, which was played on a Friday afternoon for some ungodly reason, drew an abysmal 86,000 viewers on Versus -- a number so astoundingly low that it begs to question what the ratings would have been if the game wasn't competitive.

The bottom line is that the UFL has absolutely no chance to succeed in the United States. That's not to say that it will die immediately; after all the Arena Football League has been around since the 80's, and even the European NFL league lasted for a decade and a half. It's possible that if the UFL pinches enough pennies, it can manage to survive for a few more seasons. But when your attendance numbers aren't even half of what the XFL was posting, and when your championship game draws about as many viewers as a 5 AM rerun of InuYasha on [adult swim], your league has ZERO chance of succeeding.

Sure, the league could get a boost in 2011 when a few NFL players stop by for a few games. But it'll be like the band playing on the Titanic as it sinks; as soon as the NFL works out a new collective bargaining agreement, the UFL will be S.O.L., and will have no one else to blame for its self-inflicted wounds that never even gave them a chance of becoming something important.