Share All sharing options for: Florida Joins Parade of Schools With Agent Problems 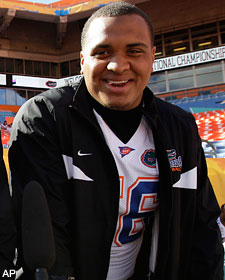 UPDATE: ESPN.com's Joe Schad is reporting Pouncey will issue a denial Tuesday. Schad's sources say the Pounceys have provided phone, bank and credit card statements that do not show large payments. Maurkice Pouncey said he purchased an Escalade and jewelry on deferred line of credit after the draft and has lent the car to his brother Mike, who is still a student-athlete at Florida.

The NCAA has a ton on its plate—there's this little matter of conferences sitting on shifting sands, and that NCAA Tournament restructuring, and, oh, the transition from interim president Jim Isch to Mark Emmert happens in November—at the moment. Adding a breakout of agent-related malfeasance would be just what the organization needs, right? Florida's just the latest school to provide, according to ESPN's Pat Forde:

â‡¥Florida is internally investigating what sources described as an allegation that a representative of an agent paid Pouncey $100,000 between the Gators' loss to Alabama in the Southeastern Conference championship game to Alabama and their season-ending Sugar Bowl victory over Cincinnati. Florida apprised the NCAA of the allegation after it became aware of it.â‡¥â‡¥

â‡¥"We were made aware of some information in early June that we reported to law enforcement and we then shared with the NCAA and the SEC," athletic director Jeremy Foley said in a statement released Monday morning to ESPN.com. "At this time we have no information that has indicated that there are any compliance issues for the University of Florida."â‡¥â‡¥

File this with the issues about North Carolina's Marvin Austin and South Carolina's Weslye Saunders, and you have three schools currently looking into illicit relationships between agents and players. That is, as anyone who watched Schoolhouse Rock knows, the magic number for hyperventilation.

But what can be done? It's a massive, daunting question. And a fair number of the college football observers thought the scandal (and subsequent punishment) that rocked USC was extraordinary because it was baffling that the Trojans got caught. The assumption is that there's an entire shadow world no one can see. It's lousy with agents nefarious enough to do whatever they want to secure clients. The players, always on the fringe of that world, are so poorly compensated by scholarships that the temptation to take more will always prove irresistible. And schools and the NCAA seem largely powerless to stop the cycle.

So fans sit and wait and wonder, and fans hope that due diligence exonerates their team and takes down State U. up the road. Florida could lose the win from its Sugar Bowl destruction of Cincinnati and about eight people would care. By the end of this week, Wyoming might be the only FBS school without an ongoing investigation into improper behavior by agents, and only because reports will be released alphabetically.

This is the cycle. It's a problem. And the solutions aren't good enough.