Jamie Moyer Open To The Possibility Of Playing Into His 200s

Share All sharing options for: Jamie Moyer Open To The Possibility Of Playing Into His 200s 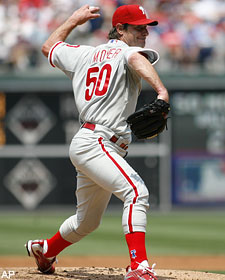 Or maybe just his fifties. Still, Jamie Moyer is clear on the fact that he isn't dogged by the jokes made about his age, nor the ravages of aging itself, and is willing to keep going for possibly two more seasons. Or more. â†µ

â†µMoyer's contract with the Phillies expires at the end of this season, but there should still be demand for his services. He's pitching at a level that is respectable enough that finding a team willing to fit him into a rotation doesn't seem like an improbable prospect. Just this season, he became the oldest pitcher in MLB history to record a shutout. â†µ

â†µWhile he endured sports hernia surgery and attending complications this past winter, Moyer said he hasn't reached a point where his body or his mind has signaled that enough is enough. â†µ

â†µâ‡¥Ive been around a lot of guys that have retired. A lot of times they say, I dont think I can compete anymore, or, My body isnt holding up, or, I cant do this or I cant do that. I dont feel like Ive come to that point. So why not keep on playing? Tomorrow, I may wake up and say its enough. Or, at the end of the season, I may say its enough. Or, 2 years from now, you may see me still in a uniform. I may still have that desire. â†µ

â†µThough he's the oldest active player, Moyer would still have a ways to go to equal Satchel Paige at 59 for being the oldest ever to play in the league. Still, he would be the first player age 50 or older to be on a roster in 45 years. None of this appears to be Moyer's aim. Age, as the saying goes, is just a number and the pitcher will be the only one who knows when his time to hang it up has come â†µ