For the past few years, NASCAR has been lacking in feel-good storylines.

Dale Earnhardt Jr. fixed that for his legion of fans on Friday night.

Earnhardt Jr. electrified the Daytona International Speedway crowd by returning his late father's famous No. 3 Wrangler car to Victory Lane in what the sport's most popular driver said was his final time in the 3 car.

Winning with his Hall of Fame dad's number at the place where Dale Earnhardt Sr. lost his life in a 2001 crash left many fans emotional. Thousands of fans remained in the stands long after the race, cheering and celebrating as they watched Earnhardt Jr. in Victory Lane.

"It was a real emotional win," Earnhardt Jr. said. "It was obviously to honor my father, but for his fans too. They were so supportive of him and still are today. So I want to thank them."

Said crew chief and cousin Tony Eury Jr.: "It was a real special win. Like Dale Jr. said, it was kind of like old times there."

Earnhardt Jr. led a race-high 33 laps and was unchallenged on the final green-white-checkered as runnerup Joey Logano pushed him to the win.

Afterward, Earnhardt Jr. reiterated that he will never drive the No. 3 car again.

"I will never do it," he said. "I will never rethink it, I'll never consider it. It's important for people to know, that's as concrete as it gets." 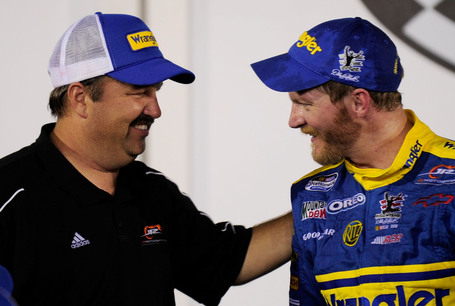 In a lengthy post-race news conference, Earnhardt Jr. had plenty to say. Here are some selected comments:

"Victory Lane is like when you're a little kid and you've got a treehouse or you and your buddies have like a clubhouse in the woods or whatever. That's what Victory Lane is to me. And I like going there. And you miss it. Really bad. But you know it's there and you can get back there again if you try really hard. It's very difficult to get into. Every time I win, I really soak it up like a sponge, because we've had such a trying time for the last several years. Sure, I'd like to get back to where I can win multiple races a year, but that's not where I'm at right now. I feel lucky and blessed for how it's going right now. I'll keep working hard to get better and do more."

"Daytona is a special place to me, because of my father dying here and I'm totally a part of this place for the rest of my life, regardless of what the history of the track is. Just this area and this place. I used to come down here as a kid. ... I ran around town...clubbing and carrying on in my 20s. I've seen every corner of this place. And I love it as a town. It ain't changed much to me. The track has such a beautiful history and so many great things have happened here. To me, it's the track in our series. It's the mother of all racetracks in this sport. Everything about our sport leads back to this place, in my mind. So it's very important."

"I don't know who owns this car, and I don't care. I think I'll take it and give it to (NASCAR Hall of Fame executive director) Winston Kelley, let him have it (in the Hall of Fame) for a few months. Then send it up to Richard (Childress) and let him have it for awhile. Hopefully it ends up back in my hands eventually again one day. It's just nuts and bolts. I think Winston Kelley said in Victory Lane he would love to have it, and it would be a hell of an honor to put it over there in his place in Charlotte for awhile."

"I think people can stop questioning my commitment – whether I care, whether I have the passion anymore, whether I have enough passion. I have worked my ass off to get back just to subpar. Is that (the right word)? (laughs) To be above average. I've busted my ass. I can't drive and work any fuckin' harder than I'm workin' right now. I can't. This is all I've got. And I'm doing it hard, man. I cannot work any harder. You can't do this half-assed. You can't do it 90 percent. You'll get eaten up and it'll be obvious to everybody around you – your team, your crew chief, everybody who builds your motors, builds your cars – they'll stop giving a shit because they know that you're not giving a shit, and you won't go anywhere. So you can't go half-assed."

"I (ask) myself every year, 'Am I working hard?' Yeah. I can't work any harder. I've asked myself, 'Maybe people are right. What more can I do?' But this year, I mean, we've wore it out trying to get back to where we need to be. I'm not burnt out, I've still got a lot in the tank. We've got a long season left, but I've got the passion, man. I want to win. I want to be here for a long, long time. But I guess people will question that until you're done. And not just me, I'm sure many other drivers, too. I shouldn't take it so personal, but man, when you work so damn hard...you guys know how it is. You're working your ass off to try and get somewhere and do the best you can at your job, and for anybody to ever wonder if you're giving it all you've got, it pisses you off. That's just the way it is."

(On whether he overthinks things) "I mean, look at my beard. I don't really overthink too much. I grew the beard back because I've been running better, y'all. I mean, have you not matched it up? We had that first 10 races where we hauled ass, and then I shaved and we didn't run worth a damn, and then I grew the beard back. And also, I started drinking beer on Mondays. The beard does have a Facebook page, but it's not a real person. It's just a beard on my face. I quit partying so much and ain't been running good, so I drank beer every Monday and I grew my beard back and those two things seem to be helping me. Those two things deserve the most credit."

"I'm just as shocked as everybody else (to win). I don't know if everybody expected us to win this race, but I sure as hell didn't. I knew we had a fast car, but shit, man, it's such a lottery. Everything worked out. I'm like five percent of what it took to get into Victory Lane in that car. There are so many other variables...all kinds of little things."

"Just fun, you know? I had a blast. Even if you win this race and you tear one damn car up, as an owner, it's so hard. It just breaks your heart, and breaks the bank, too. So we feel pretty good to get out of here in one piece and one of them's in Victory Lane. We're really lucky."

"I'm so glad we won. It means more to me now knowing that I won't ever (drive the 3) again and I won. We can all just remember this and squash it and finish our lives and get on with our lives."

(On running the 3 again in the future) "I'll never rethink it; I'll never consider it. I think it's important for everybody to know that that's as concrete as it gets. I'll never do it again. I enjoyed it. It's hard for me; it's a balancing act between (the media) and the public and myself and my own feeling. I mean I kind of look at what you guys are putting out there to kind of get a temperature of how the public's feeling and it's such a tough deal. It's real emotional for me preparing for it and putting it together. Is Rick OK with it? Did Rick mind? Is Richard happy with his role and is Teresa truly OK? It's just so damn hard to know how everybody feels about it."

"I just like cool looking cars. This was a hell of a cool looking car. I just always like this scheme. And that's all that mattered to me was just the scheme. I just love the car (and) I wanted to race it once. I did. I didn't really put a lot of stock in the fact that the three was coming back like a lot of people did. I didn't approach it that way, mentally, where everyone else was thinking, ‘The 3's back. Earnhardt, the 3's back.' But when I started hearing all that, how everybody was making such a big deal out of it, I was like, ‘Shit man, this is pressure man. This is a big deal.' I was a little nervous. I don't know if I liked that or not."