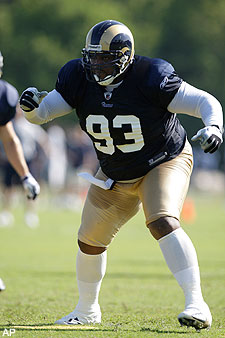 Noted Spongebob Squarepants fan and defensive lineman Hollis Thomas, who split last season between the Rams and the Panthers, yesterday received an eight-game suspension from the NFL for violating the league's policy on performing enhancing substances. â†µ

â†µA 36-year-old free agent, some presumed this meant the end of Thomas's playing career in the NFL. It very well might be, but that doesn't mean he's giving the game up entirely, for Thomas will instead play for the UFL's Omaha Nighthawks. The Nighthawks took Thomas 11th overall in this year's UFL draft, which at the time was a derided decision given the expectation that Thomas was still actively pursuing a career with an NFL team. â†µ

â†µOf course, this presents a bit of an issue for the UFL's status as a developmental league for the NFL. If Thomas can run afoul of NFL PED standards and opt instead to play for the UFL without incident, what does it say about the standards of the UFL? Why would the NFL consider any players down the road from the UFL, knowing they could have illegally bolstered their play without having been detected? For a Thomas, a player in the twilight of his career, this matters little, but it will have to be something remedied sooner rather than later if the NFL-UFL relationship is to mature further. â†µ