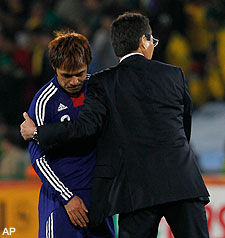 It may be a bemusing response for a team's scapegoat, but for all the stories of threats and outlandish violence in reaction to World Cup failure, perhaps it's a little refreshing that a Japanese governor wants to give a congratulatory medal to defender Yuichi Komano, who was the only player on either side to miss a deciding penalty kick in Japan's match against Paraguay. â†µ

â†µâ‡¥The governor of Komano’s native Wakayama prefecture told Japanese media on Friday he wanted to present Komano with the medal for his efforts in South Africa. â†µâ‡¥

â†µâ‡¥ “We would like to present Komano with a medal for giving people such dreams and emotions,” said Yoshinobu Nisaka Wakayama, who watched Japan’s penalty shootout defeat by Paraguay at a public viewing area with Komano’s mother. â†µâ‡¥

â†µI'm sure not all of his countrymen share Wakayama's desire to recognize Komano's efforts, but if you're the prefecture governor, you're not going to turn your back on the local product, even when he sadly comes up short. Given that the Nigerians were reportedly threatening Sani Kaita en masse for receiving a disastrous red card that he probably shouldn't even have gotten, it's a welcome and level-headed response from the Japanese, however ridiculous it might seem on its face. â†µ