I've given a little background on both men over the past week and while it's very, very easy to simply key in on the "size issue" with this fight there is a whole lot more going on. Both men are former collegiate wrestling champions, both men have incredible strength, both men hit like trucks. But you just can't help but come back to the size issue.

Shane Carwin was listed at 6'0" coming out of college, the UFC was recently pushing him as 6'5" which was ruined when both Frank Mir and Brock Lesnar towered over him and now they're listing him at 6'2". Lesnar has pretty much always been listed at 6'3" and as you can see from this photo (credit: Heavy.com) taken at the pre-fight press conference it is clear that Lesnar is more than one inch taller: 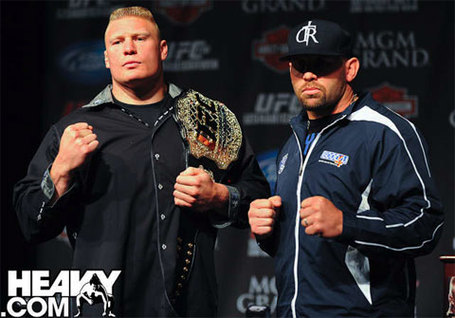 Carwin has shown the better finishing ability and more raw power over the course of their respective careers but both men hit hard enough that it's a bit of a moot point. If either man lands hard to the chin, the fight could well be over. While Carwin has been the guy knocking people out, Lesnar broke Heath Herring's eye socket with a single punch in their fight as well as knocking down everyone he has faced.

In my eyes the fight comes down to if Lesnar can keep Carwin from initiating the clinch and pushing Lesnar against the cage. If Lesnar is initiating the grappling and making Carwin wrestle it is going to test the cardio of Shane, who has never been out of the first round of a professional fight. On the feet it is up to Lesnar to use his longer reach to keep Shane outside and keep the thought of a takedown in his head and not let him inside, he'll take the fight over. However, if Carwin can get inside and land punches he can hurt, and finish, Brock Lesnar.

Leben is making the quickest turnaround between UFC fights ever with only two weeks since his stoppage win against Aaron Simpson. When Wanderlei Silva was forced off the card due to injury Leben was happy to jump into the co-main event and attempt to make his return to relevance official.

Akiyama is a decorated judo player with pretty solid striking but he is also very small for the 185 pound division. He is going to be making an attempt every second of the fight to close distance, initiate the clinch and put Leben on his back. The idea of standing up with Leben is a bad one since it is the only place where Chris can win the fight.

Leben has great, raw knockout power but he's also lacking in the wrestling and submission departments. However, with the size difference he may be able to make it difficult for Akiyama to put him on the ground. It's speed and technique vs. raw KO power. A Leben win would be shocking and a part of a great comeback story while Akiyama attempts to move closer to a title shot against pound-for-pound great Anderson Silva.

The Rest of the Card

Matt Brown and Chris Lytle will be meeting in a bout between talented strikers with underrated well-rounded attacks. Lytle has the better chance to finish the fight on the ground so if he can put Brown on his back it will be to his advantage. However, Brown can hit hard and make things very hard on anyone but the very best in the division.

Former Ultimate Fighter winner George Sotiropoulos faces a stiff test in the solid submission attack of Kurt Pellegrino.  Sotiropoulos is very long and sneaky on the ground which makes him a very real contender. Pellegrino is probably the slightly better striker but this fight will end up on the ground at some point and with two very good jiu-jitsu players it should be entertaining.

Stephan Bonnar and Krzysztof Soszynski rematch in a fight that should be action packed but sloppy. Bonnar lost the last fight on a cut that came from an accidental foul but was likely on his way to a loss either way. Whichever fighter is able to do the better work early will likely be the man that takes the W as I don't think either man can finish the other.

Don't forget to make SB Nation your home for Saturday night's event as we provide live results and thoughts on the event.