One of the best parts of video games is ignoring character issues and signing the best players possible, regardless of chemistry problems. Would you like to construct a team around Randy Moss, Terrell Owens, Chad Ochocinco, and Brandon Marshall? With Seneca Wallace as the quarterback? In Madden, that's UNSTOPPABLE.

But now, instead of speaking in vague terms about the sorts of players gamers typically look to acquire—he's "cool," or "stylish," or "I'm trying to build the team with the worst attitude possible, and Brandon Marshall grades off the charts in that category"—finally, Madden 2011 features the Swagger Rating. Behold: 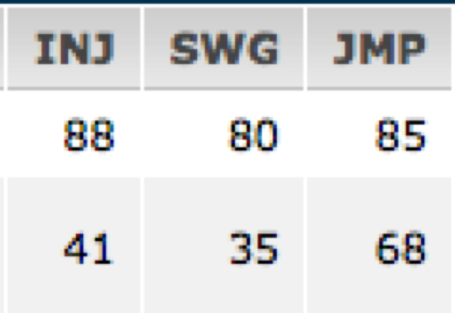 What lame NFL'er grades out at 35, you ask? Correll Buckhalter. He's not swaggin AT ALL.

The rating is sponsored by Old Spice, which makes it less awesome, and it's not clear how it affects gameplay. But let's be honest: this is just here to help fans screw around and argue. Which is really the chief purpose of video games in the first place.

Can you build the swaggin'est team of all time? That's the challenge set forth here. And while you marinate on what that team might look like, here are some other notable Swagger Ratings (via ESPN):

My only complaint: not enough terrible players with swagger ratings 90+. The NFL is LOADED with these guys. Who come out looking immaculate, with like eight color coordinated sweatbands, matching visor, florescent-colored shoes, and then play special teams for 60 minutes. Can't Antwan Randle-El at least get a high swagger rating?

But yeah, there are lots more, and frankly, this whole thing might require a longer discussion. But for now, go check out the swagger ratings. You know you want to. It's an easy way to waste 45 minutes, and really that's the highest endorsement we can bestow around these parts. Check it.

(And yeah, kidding about the Rams...)