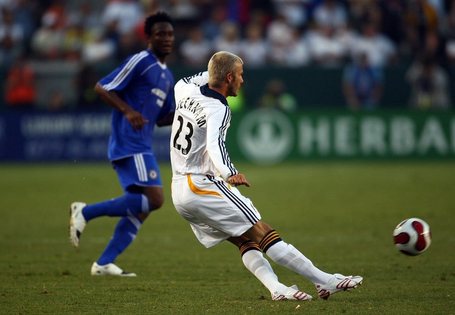 In January 2007, the Los Angeles Galaxy of Major League Soccer announced that they had signed David Beckham to a five-year deal worth $250 million. The deal, which was later revealed to be worth a more-reasonable $32.5 million, brought one of the biggest stars in the world to the United States. Beckham was a sex item, a paparazzi magnet, and one of the most respected futbol players out there, having previously played for Manchester United and Real Madrid. Some believed that the celebrity of him and his wife Victoria -- best known in the states as "Posh Spice" of the Spice Girls -- could bring legitimacy to the fledgling sports league. But Beckham failed to live up to the hype, and his uneventful debut on July 21, 2007 was about as eventful as it got, unfortunately.

On that July evening, 27,000 people packed into the newly-built Home Depot Center to see Beckham lace it up for the first time -- it was an exhibition game and the opponents were Chelsea FC. A-list celebrities packed into the arena to see his debut, among them Arnold Schwarzenegger, Drew Carey, Kevin Garnett, Eva Longoria, Tom Cruise, Katie Holmes, and John Hurt. L.A. mayor Antonio Villaraigosa, who had only been on the job for twenty days, was there as well and was roundly booed when he stepped onto the field to greet Beckham. 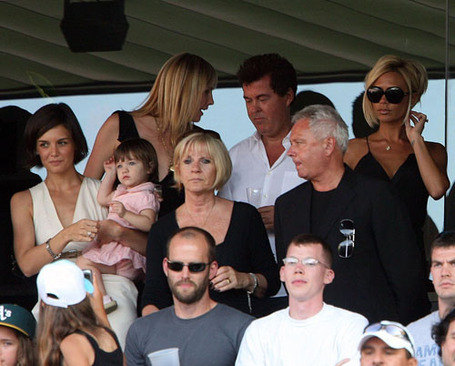 As the game began, the one person not on the field was the only one who really mattered -- David Beckham. He had sprained his ankle a few weeks ago while playing for his ex-team, Real Madrid. He had told reporters the day before, "I'll be very happy if I played five or ten minutes," which was hardly the response people were looking for.

With ESPN broadcasting the match, Beckham sat on the bench as the game progressed to one-third completion, half-over, three-fourths over... ESPN, rather than focus on the game at hand, instead concentrated entirely on Beckham. There was split-screen action as half the television showed Beckham shuffling his feet, appearing to put on his shoes, taking off his shoes, putting them back on, waving his feet, and so on. Then he got up and started to run around the track, with the cameras following him all the way.

At last, after almost 80 minutes of bench-warming, Beckham finally checked in and played twelve minutes of garbage time. He touched the ball thrice, each time eliciting an anticipatory cheer from the Galaxy crowd. He did not score a goal or do anything amazing; his team lost, 1-0. It was hardly a stellar introduction.

The later games weren't much better for Beckham. The Galaxy traveled to city after city and produced a sellout crowd wherever they went, but Beckham barely showed himself at all. Two weeks after his debut, he had yet to even get on the field in a regular season game. He played just five games for the Galaxy that year before shutting down his season altogether. In his first full season in the MLS, Beckham scored only one goal and failed to get his team into the postseason.

It didn't take people long to label the Beckham experiment a bust. Aside from the early sellouts from curious spectators, and a respectable increase in ticket sales and merchandising, Beckham's arrival in America had virtually no impact on the popularity of soccer. People came to see celebrity, and to hang out with Posh and her big-name friends like Katie Holmes and Tom Cruise. The games were no more than a glorified red carpet, with Beckham working a soccer field in place of a runway -- never was this more evident than when ESPN fixed the camera directly on Beckham's shoes, even though the soccer game was playing on without him. Just a year after his inauspicious debut, Beckham and the Galaxy had become virtually irrelevent. Even when they managed to go to the MLS Cup in 2009, the ratings for the game were on par with the previous season's championship game.

Beckham wasn't even the most anticipated Brit to come to America on July 21, 2007; that happened to be the day that the seventh and final Harry Potter book was released in bookstores. 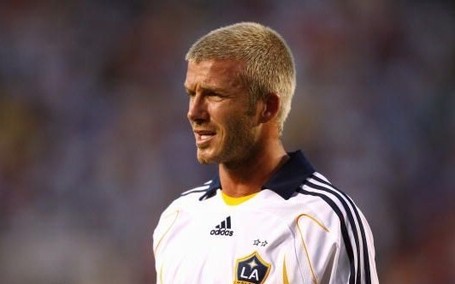 (Beckham looks on during his MLS debut. Photo by Shaun Botterill, Getty Images)

It was because of that lack of results that Becks soon found himself the brunt of people's criticisms. When he first signed with the L.A. Galaxy, David indicated that he wanted to revolutionize the game of soccer in America -- something Pele, Mia Hamm and Freddy Adu couldn't do. His commitment to his promise was questionable, however, as he was often absent when the Galaxy needed him most, and left the team to once again play in Europe on more than one occasion. In 2009, Beckham was even criticized by Galaxy teammate Landon Donovan, who was widely regarded as the best soccer player in the United States.

"All that we care about at a minimum is that he committed himself to us," Donovan said of Beckham. "As time has gone on, that has not proven to be the case in many ways -- on the field, off the field. Does the fact that he earns that much money come into it? Yeah. If someone's paying you more than anybody in the league, more than double anybody in the league, the least we expect is that you show up to every game, whether you're suspended or not. Show up and train hard. Show up and play hard."

Asked if he felt that Beckham was a good teammate, Donovan answered: "He's not. He's not shown that. I can't think of another guy where I'd say he wasn't a good teammate, he didn't give everything through all this, he didn't still care. But with [Beckham] I'd say no, he wasn't committed."