Okay Hornets fans, now's the time to panic. No less than LeBron James has come out of the woodwork to offer support for Chris Paul. 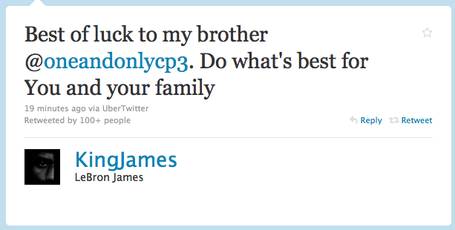 It's a small gesture, but still. Paul's newfound alliance with James' marketing company is widely suspected as the source of his sudden urgency about finding a new home, and without delving too far into a discussion about LeBron, it's safe to say he's laid out a pretty clear blueprint for any young superstars looking to "do what's best for their family."

I mean, as an NBA fan, I'd be terrified if LeBron James even spoke to my favorite team's star player, let alone called him one of his best friends. And if James offered a public show of support just hours after said star was rumored to have demanded a trade to a team with one or more superstars? Yeah...

That writing on the wall over there? It's not good for the Hornets.