In Sports Illustrated's most recent Fortunate 50 rankings, it was reported that Tiger Woods lost $22 million in endorsements since his well-documented fall from grace last November. It looks as if that number may continue to drop as one of Tiger's biggest backers, EA Sports, has seen sales of Tiger Woods PGA Tour '11 plummet.

Late last week NPD released the official sales numbers for June. Tiger Woods 11 saw a huge drop-off from what Tiger 10 sold in its first month. Given the numbers that were on hand I estimated that it had fallen in the 40-50% range. It turns out that the situation was even more dire than anticipated. Sales actually dropped 68% year-over-year for all formats combined while the Wii version specifically fell an almost unbelievable 86%. It went from 272K to 38K.

EA Sports, who have been tied to Woods for over a decade, has acted a bit differently since Tiger's scandal.  While companies like Accenture, TAG Heuer, and Gillette cut ties or reduced Tiger's role as a spokesman, EA Sports has always had an exclusively golf based relationship with Woods, making his personal life of less importance. Apparently that's not the case as Pastapadre points out:

Some are pointing to less in the way of marketing as another reason to consider, though that is a direct symptom of the issue EA faced by keeping Tiger on as the face of the game. They could no longer promote him, and in turn the game, in the same manner and to the same extent as they had in the past. Clearly EA Sports has little choice but to make drastic changes now. Whether that means a rebranding of the franchise remains to be seen.

The drop in sales can be attributed to little else besides the scandal because, as anyone who has ever played the game before knows, it's awesome. Should they choose to cut Tiger free, EA Sports may have already begun to cover their bases. On this year's Tiger Woods PGA Tour '11, Woods shares the cover with 21-year-old Brit, Rory McIlroy - a potential new face for EA's golf platform. 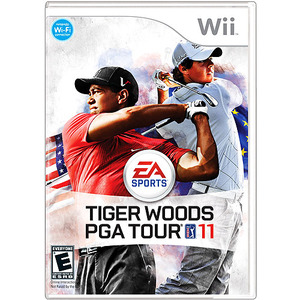 EA Sports has been known to have controversial figures on the covers of their games before, however. There was much ado last year when the company chose to put convicted rapist, Mike Tyson, on the cover of Fight Night 4 with Muhammad Ali. The video game company, in response to the Tyson dilemma, responded by saying that Tyson was one of the greatest fighters of all time and that was what influenced their decision. Woods has dominated golf more than Tyson ever did boxing but, if sales of Tiger Woods PGA Tour '11 continue to falter, EA may have no choice but to find a new face for the platform.