On Thursday night, Royals outfielder David DeJesus left the game after attempting to make a catch against Yankee Stadium's outfield wall. The injury occurred in the bottom of the third inning, when Derek Jeter smashed a ball to the wall. DeJesus put his glove on the ball, but immediately ran it against a padded beam, apparently rolling his wrist. Here's how it looked on YES Network's broadcast: 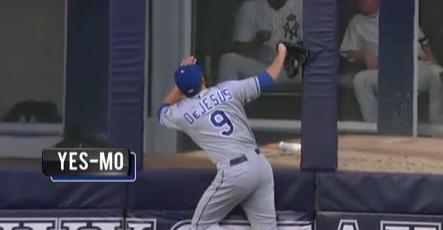 DeJesus dropped the ball, and as a consequence, Jeter raced around the bases for an inside-the-park home run.

DeJesus, an offensive bright spot for the Royals in 2010, is having a career year -- he entered Thursday's game with a .386 on-base percentage. There's no official word yet on DeJesus' injury. For updates, stay tuned to this StoryStream, and for more on the Royals, check out Royals Review.