Ed Reed Is Upset With The Ravens, Unveils The Rare Triple Negative

Share All sharing options for: Ed Reed Is Upset With The Ravens, Unveils The Rare Triple Negative

As a disclaimer up front, nobody's got a problem with Ed Reed here. In fact, when you think about it, Ed Reed is probably the most complete personification of all that makes football so awesome.

Pretty simple: One way or another, Ed Reed embodies what anyone loves about football.

But yeah, this makes no sense:

Ed Reed said the team refused to give him game film when he requested it a couple of weeks ago.

He added, "I got the text message to prove it, so this ain't nothing I'm not lying about."

See, what he's saying there is, "This is not nothing that I'm not lying about."

And why is he wearing two hats here? 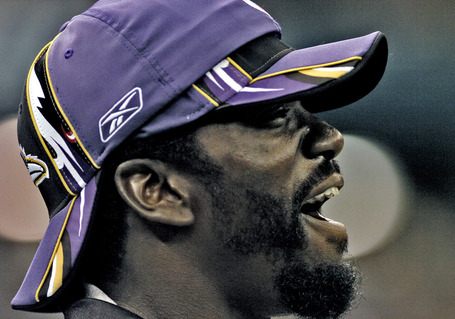 Because he's Ed Reed, and sometimes, when you're that badass, you can get away with doing or saying anything. As he elaborates on his current grievance with the Ravens organization:

Reed said he was still able to watch old film that he had, which is why he described the incident as "minor."

"But don't treat me like that after I gave my blood, sweat and tears for this guy -- for this organization," Reed said. "I train my tail off. I'm putting my life on line. But I have to give you an excuse to study tape? When I do give you an excuse -- and my excuse is I'm studying tape -- that's not a good enough excuse. But Ed is wrong for asking for a new contract. Come on, man."

Again, I'm not entirely clear what's happening there. Is he complaining about the Ravens not sending him tape, or is he demanding a new contract? And why is he wearing two hats up there?

Doesn't matter. As Reed concluded his remarks, he said, "I could retire. I don't need the money. They could come and get the money if they want. Money don't make me. Money didn't put me here."

That's the lesson: Ed Reed was, is, and always will be, a bad motherf**ker.