Why Would Anyone Ever Rob Stephen Jackson?

Share All sharing options for: Why Would Anyone Ever Rob Stephen Jackson?

Disturbing news out of Charlotte this morning. According to the Associated Press, armed burglars broke into the home of Stephen Jackson while the Bobcats star was in Texas for a basketball camp. The thieves reportedly held his wife at gunpoint before locking her in a bathroom, eventually making off with a collection of valuables. Scary stuff.

But wait a second. Somebody really thought it was a good idea to rob Captain Jack? 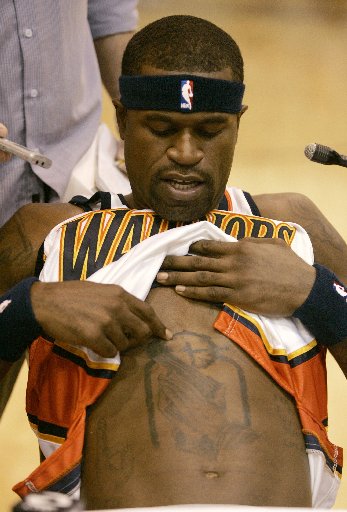 Is that...? Yes, that's a tattoo on his stomach of two hands in prayer, holding a pistol.

And these masterminds put a gun in his wife's face? Anytime you're robbing someone and it turns out they have a gun, that should be a red flag right there:

Charlotte-Mecklenburg police had made no arrests as of Friday morning, Officer Rosalyn Harrington, a department spokeswoman, told The Associated Press.

Officers reported the thieves took a 9mm pistol, a ruby-encrusted wristwatch, a Louis Vuitton wallet and other items.

Some advice for the criminals: Turn yourselves in while you the have chance. You held a gun to Captain Jack's wife. Yes, you got his Ruby wristwatch and his Louis Vuitton wallet. But do you think that 9 mm pistol is the only gun he's got?