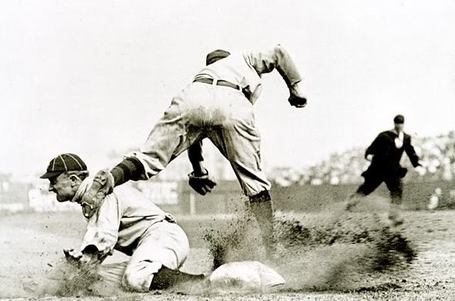 (The famous photo of Cobb. Photo courtesy of Charley Conlon, The Sporting News)

It was on this day in 1910 that Charles M. Conlon snapped one of the most famous photographs in all of sports. Jimmy Austin of the New York Highlanders, later known as the New York Yankees, was playing third base when Ty Cobb came barreling at him, attempting to steal the base. As the catcher's throw caught up with them, Cobb slid directly into one of Austin's legs with his spikes in the air, the dirt flying up off the ground. Unable to catch the ball cleanly, the ball flew past him to the outfield. It epitomized how Cobb played the game.

In a 1937 interview with The Sporting News, Conlon said, "My first thought was that my friend, Austin, had been injured. When Cobb stole, he STOLE. Spikes flew and he did not worry where. I saw Ty's clenched teeth, his determined look.

"The catcher's peg went right by Jimmy, as he was thrown on his face. I went home kicking myself. I said, 'Now, there was a great picture and you missed it.' I took out my plates and developed them. There was Cobb stealing third. In my excitement, I had snapped it, by instinct. The picture was not printed the next day. It did not appear until the Spalding guide came out the following spring and has since been published in more than a thousand papers."

The image is one of the most iconic ever snapped on a baseball diamond, though its origins are a bit murky. Almost all publications say that the photo was taken in the summer of 1909, as did Conlon himself. However in 1993, Neal McCabe authored a book entitled Baseball's Golden Age: The Photographs of Charles M. Conlon. In a letter he wrote to the New York Times, McCabe deducted that the photo could have only been taken on July 23, 1910. "It became obvious that the scenario described by Conlon never happened, at least not in 1909," he wrote.

When Lance Armstrong retired after winning the Tour de France a record seven straight years, it was presumed that Americans would no longer follow the event with interest. Americans had barely payed attention to the French bicycling competition before Lance, and without another inspirational American competing in it, it appeared that the Tour would return to its previous status in the U.S.

But people quickly learned that this was not the case, as it was an American who won the event on this day in 2006. Giving the U.S. their sixth consecutive win in the Tour de France was Floyd Landis, a former teammate of Armstrong whose background story was just as, if not more compelling. A 30 year-old from Lancaster, Pennsylvania, Landis had been riding in considerable pain due to a hip ailment he suffered seveal years ago, but he had put off the surgery for a whole year just so he could race. Even more improbbable, Landis and his family were Mennonites, meaning that besides growing up isolated from technology, his own parents were unable to watch him race on television.

As the tournament began to wind down, the press began to pick up on the story. It was just as Landis had attracted the attentions of millions of Americans that it appeared that the feel-good story wasn't going to happen. After a terrible 16th Stage (out of 20), Landis was 8 minutes and 8 seconds behind the leader and had fallen back to eleventh place. But miraculously, Landis came out like a man possessed the next day; in one of the greatest turnarounds the sport had ever seen, he won Stage 17 by more than six minutes and immediately got back in contention. By Stage 19 he had reclaimed the lead and he won the event by 57 seconds.

"My parents taught me that hard work and patience are some of the most important things in getting what you want," said Landis, who received a congratulatory phone call from president George W. Bush. "It took me a long time in my life to learn patience, but that, and persistence, are the lessons I learned in this race."

Landis' win had the makings of a script that a Hollywood director would salivate over: the old country boy, taking up a lifestyle that the community disapproves of, competes in one of the hardest endurance tests in the world, needing hip replacement surgery, falling eight minutes off the pace, comes back, regains the lead, and wins the damn thing. It was a phenomenal story... but just four days later, it all went up in flames.

Mark Buehrle of the Chicago White Sox pitches a perfect game against the Tampa Bay Rays, making him just the 18th pitcher in history to retire all 27 batters without a hit or error. It was the major's first perfect game in five seasons, when Randy Johnson dominated the Atlanta Braves in 2004.

What made Buehrle's accomplishment all the more spectacular was a defensive play made by Dewayne Wise, who had been subbed in to play center field in the top of the ninth. That inning, with Buehrle having retired the first 24 batters of the game, Rays outfielder Gabe Kapler smacked a pitch to deep left-center field. The ball would have left the yard and ruined the perfect game Buehrle had worked so hard on. But Wise made his insertion look ingenious by jumping at the wall, pulling down the baseball, bobbling it and holding on as he tumbled to the ground.

"It was crazy, man," Wise said of his home-run-saving catch. "That situation, a dead sprint out there. Every time I look at that I just get chills, like, wow, how did I make that catch?"

"Had that play been made in a 6-4 ballgame in the third inning, it would have been an outstanding play, probably No. 1 on all the highlight reels," said Kapler. "But given the situation in the game and what was at stake, it turns into one of the best catches, potentially, in history."

"We keep him for a reason," said White Sox manager Ozzie Guillen. "I wanted to have more range in the outfield. That's one of the best plays I've seen, especially in that situation."

In his next start, Mark Buehrle took another perfect game into the sixth inning before getting knocked around and ultimately losing. He did, however, break the all-time record for consecutive batters retired, a record that had been set by White Sox teammate Bobby Jenks.