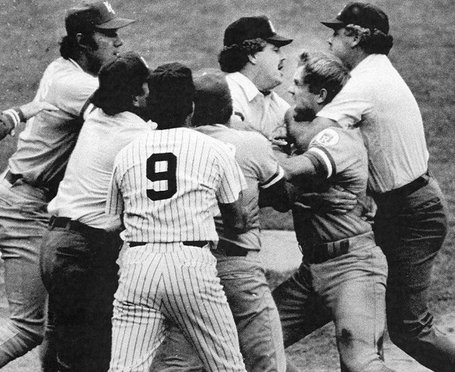 (Brett goes out to argue the call. Photo courtesy of The Associated Press)

It was the top of the ninth at Yankee Stadium. With two out and a man on first, Royals third baseman George Brett was at the plate, with New York closer Goose Gossage on the mound. In the matchup between two future Hall of Famers, Brett got the upper-hand, hammering a pitch into the right field bleachers. The home run gave the Royals a 5-4 lead... or so it seemed.

Yankees third baseman Graig Nettles had noticed earlier in the year that Brett used a large amount of pine tar on his bat (as many hitters did to grip the bat better). Nettles was aware of an obscure baseball rule forbidding no more pine tar on a bat than the width of the plate (18 inches), and that Brett appeared to violate this rule. Nettles, who was caught using a corked bat nine years earlier, had informed manager Billy Martin of this previously in the year. And now that Brett had hit, barring a ninth inning rally, a game-winning home run, there was no better time to bring it up with the umpires.

Martin was already talking to home plate umpire Tim McClelland before Brett even touched home plate. McClelland summoned the other umps to the diamond to discuss it, then rested the bat on the plate as Brett watched curiously from the dugout.

"I had no idea what they were talking about," Brett told ESPN on the game's 25th anniversary. "Then McClelland laid the bat on the ground, I looked at [teammate] Frank White on the bench and said, 'What the hell are they doing now?' Frank said, 'They're measuring for pine tar.' I turned to Frank and, I think, Vida Blue, and said, 'If they call out on that, I'm going to run out there and kill those SOBs.' "

Just as he said that, McClelland pointed to Brett and signaled him out. Instead of hitting the game-winning home run, he had been called out on violation -- ending the ballgame in a Yankees win. "That," Goose Gossage said, "was the maddest human being that I've ever seen in my life."

Instantly, Brett bolted out of the dugout with his arms shaking and his eyes bulging. He approached McClelland and had to be restrained, as he appeared hysterically upset. The image of Brett's ballistic tirade is one of the most replayed highlights in sports history. "The video of me now is pretty hilarious," Brett said in the book, Once Upon a Game, "with me charging the umps, having to be held back, yelling and screaming and flailing my arms, but at the time it wasn't funny. It was highway robbery!"

During the commotion, Royals pitcher Gaylord Perry, a player also known for breaking a few rules, stole the bat from McClelland and carried it toward the dugout. He threw it to Rocky Colavito, who in turn passed it off to another Royals player before security intervened. The bat was confiscated by the umpires and sent to AL president Lee MacPhail.

The Royals filed a protest, claiming that the game had been unfairly taken away from them. In a rare occurrence from any of the four major sports leagues, the protest was upheld by MacPhail, who noted that while the pine tar extended 23 inches up the bat, and that technically it was illegal to use, Brett's bat "did not violate the spirit of the rules." In other words, while the bat should have been removed from the game, Brett shouldn't have been called out.

And so less than a month later, on August 18th, 1,245 dedicated sports fans walked into Yankee Stadium to see the game pick up right where it left off, right after Brett's home run. It was an odd site. Brett, Colavito, Perry, and manager Dick Howser had all been ejected three weeks ago, so none of them showed up to the ballpark. Meanwhile Billy Martin, who called the game's resumption three weeks after the fact "a mockery," staged his own protest by putting pitcher Rod Guidry in center field, because their center fielder from the July game (Jerry Mumphrey) had been traded. He also put first baseman Don Mattingly at second, making him the first lefty to play a middle-infield position in years.

The Yankees had filed an injunction to stop the game from continuing, however the courts had ruled against them. Martin had one final trick to pull. Before Yankees pitcher George Frazier faced Hal McRae of the Royals, Martin went up to the umpires and argued that Brett had not touched all of the bases during his home run trot. There was a completely different umpire crew from the July game, and Martin figured they wouldn't be able to disprove him. But crew chief Davey Phillips was ready and produced an affadavit signed by the previous crew saying that the home run should stand.

Martin then took out his frustration on Phillips, yelling at him until he got ejected. George Frazier struck out McRae to retire the side. In the bottom of the ninth, the Yankees went down one-two-three to Royals closer Dan Quisenberry, at last finalizing a 5-4 Kansas City win, and ending probably the most intriguing baseball game ever played in July. Brett would eventually donate the bat to the Hall of Fame, where it rests today.

"Honestly, the whole Pine Tar mess was the best thing that ever happened to me in my career," Brett would say in recollection. "In 1980, I had to miss a couple of innings of a World Series game because of a whopping case of hemorrhoids. For the next three years all I heard from fans were Preperation H jokes. But after the Pine Tar Game, I wasn't the 'hemorrhoid guy' anymore. I was the 'pine tar guy.' Who would you rather be?