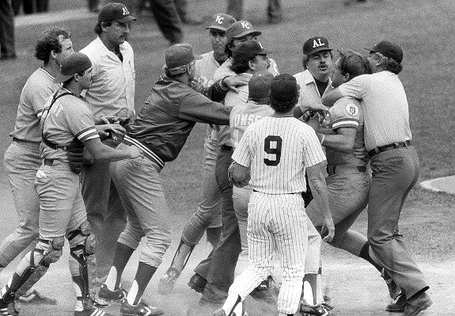 It is a legendary moment in baseball history. Upon hearing that his game-winning home run would be wiped away, Royals third baseman George Brett races out of the dugout and into one of the most famous player-umpire arguments ever.

Vince Coleman was one of the fastest base-runners the game of baseball had ever seen, compiling multiple seasons with more than 100 stolen bases and even stealing a record 50 in a row in 1989. But he was also known as a knucklehead and a bad guy to have on a team. In the 1985 season, a reporter asked Coleman, who was black, what he thought about Jackie Robinson's contribution to baseball, to which Coleman replied: "I don’t know nothin’ about him. Why are you asking me about Jackie Robinson?"

Coleman's statement outraged many people in and out of baseball, including Jackie Robinson's widow Rachel, who stated, "I hope somehow he'll learn and be embarrassed by his own ignorance."

After leading the league in stolen bases the first six seasons of his career, Coleman left the St. Louis Cardinals to sign a large deal with the New York Mets -- where his productivity took a nosedive. He did not live up to his massive $3 million salary and failed to even keep out of trouble. He feuded with Jeff Torborg, scuffled with a batting coach, claimed that Shea Stadium's aesthetics were preventing him from being a Hall of Famer, cost Dwight Gooden a start when he accidentally wacked him with a golf club, and was even accused of a raping woman in 1991, although no charges were ever filed.

But his most infamous moment came after a 5-4 extra-inning loss in Los Angeles. Coleman and Bobby Bonilla were in the passenger's seat of a car, driven by teammate Eric Davis, when they pulled up in front of Dodgers Stadium, where a few hundred fans were exiting. Coleman, as a practical joke, hurled a firecracker into the throng of people before they drove away laughing. The citizens involved weren't laughing though; the explosion injured several people, including a 33 -year old woman, an 11 year-old boy and the eyesight, cheek, and finger of two year-old Amanda Santos.

Coleman would play in three more games before the Mets dismissed him for the rest of the season (albeit with pay). He was given three years probation, 200 hours of community service, and an additional $2,500 in fines. It took him several days to apologize, and when he did, he offered the following statement: "I'm a father first and an athlete second. Amanda stood out near a gate to catch a glimpse of a ballplayer. But today, I want her to catch a glimpse of a loving father and a helpful friend."

The next season, he was traded to the Kansas City Royals.