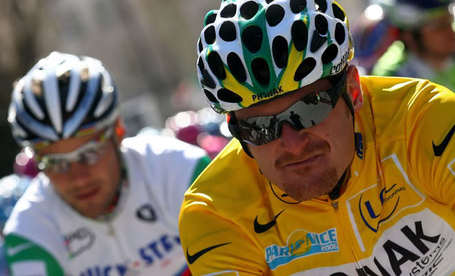 (Floyd Landis on his bike. Photo courtesy of AP Photos.)

1993 was one of low points in the history of the New York Mets. They had always been bad, with the exceptions of their miracle years in '69 and '86, but at least they were lovable. The '93 Mets on the other hand were not only bad, losing 103 games and finishing with the worst record in all of baseball, they were far from likable.

A prime example came on this day in July, when Mets pitcher Brett Saberhagen loaded a squirt gun with chlorine bleach and fired away at a few reporters who were trying to interview Dwight Gooden. The identity of the bleach-hurler would remain unknown for two whole weeks, until Saberhagen was coaxed into an admission by the front office. Although nobody was harmed, Saberhagen was blasted by Mets manager Dallas Green, who called his actions "childish" and "mind-boggling."

Saberhagen, a former two-time Cy Young winner in Kansas City, donated a full day's salary to charity and tried to apologize. "After the Mets-Marlins game of July 27, I tried, unsuccessfully, to return a practical joke played on me by a Mets employee," he said in a statement. "My intention was simply to paint the employee's jeans with bleach."

His apology was discredited not only because he had lied about it for two weeks, but because, on July 7th, he was also responsible for throwing a firecracker under a table that was near a group of reporters. Saberhagen's bleach prank came just three days after teammate Vince Coleman threw a firecracker at a group of spectators, damaging the cornea of a two year-old girl. That, coupled with the malcontent behavior of Bobby Bonilla, the cocaine addiction of Dwight Gooden, and the team's last place standing in the NL East made the '93 Mets one of the most dysfunctional teams in baseball history.

At the team's practice facility at Brandeis University, Boston Celtics forward Reggie Lewis was performing light shooting exercises when he slumped over and fell to the ground, much as he had in a playoff game three months earlier. Police officer James Crowley, who was later embroiled in a national controversy for arresting a black professor who was trying to enter his house, attempted to resuscitate the fallen basketball star. At 7:30 PM, Lewis was pronounced dead at the age of 27 from sudden cardiac arrest. He had a wife and two kids, one of which was still unborn.

It was a devastating moment for the Boston Celtics, who lost their leading scorer and team captain. Lewis had averaged 20.8 per game the previous two seasons and was the all-time leading scorer at Northeastern University, where he finished with the ninth most points ever scored in Division I basketball.

The Boston Celtics didn't recover. They had won NBA championships in the 50's, 60's, 70's, and 80's thanks to the incredible amount of talent on their rosters. But the two players who should have led the Celtics in the 1990's never had the chance; besides Lewis, the Celtics had also lost Len Bias, their No. 2 overall pick in 1986. Bias was expected to become one of the greatest of all time, but he died of a cocaine overdose two days after he was selected. After Boston's 48-win season in 1993, they lost 50 games in 1994 and 67 games in 1997. It wasn't until 2008 that they raised another banner to the rafters.

Lewis had been diagnosed with cardiomyopathy in May after he was taken out of a postseason game against the Charlotte Hornets. Cardiomyopathy, a defect that caused irregular heart beats, could be fatal if a person's heart rate escalated to the point where it cut off circulation. Lewis had been warned of his condition by the Celtics doctors, who informed him that his six-year career had come to an end. But Lewis had sought a second medical opinion and was told not a week later by Dr. Gilbert H. Mudge, Jr., a noted heart physician, that he did not have cardiomyopathy. Rather, in Mudge's diagnosis, Lewis had neurocardiogenic syncope, a benign fainting condition that should have allowed Lewis to continue his basketball career.

An autopsy revealed that Reggie's heart had been badly scarred and that he should have never gotten on a basketball court again. Lewis' widow sued Mudge and other cardiologists for a diagnosis that she claimed was "carelessly, unskillfully and negligently" performed. The suit went to trial. Mudge stated that Lewis' swollen heart might have been caused by cocaine use and testified that Lewis had told him he was using it. After several acquitals and out-of-court settlements, none of the doctors working under Mudge were deemed culpable for Lewis' death.

Just four days after winning the Tour de France, the Phonak Cycling Team announces that Floyd Landis, the Mennonite racer who had captured the heart of the nation, has tested positive for doping. During the 17th stage of the race, which Landis won by a sensational six minutes, his testosterone-epitestosterone ratio was at 11:1, far above the human average of 4:1. It was determined that Landis had increased his testosterone through illegal means; Landis asked for his backup sample to be tested, hoping that it would clear his name. But that too tested positive.

Landis was dismissed from the Phonak racing team. Less than a year later, his victory in the Tour de France was handed to runner-up Oscar Pereiro and he was banned from cycling for two years. It was a devastating turn to what had been an otherwise heartwarming story.

Floyd would spend the next year lobbying for his innocence. He contended that the positive test was skewed because while his testosterone-epitestosterone ratio was off, it had not been done by increasing his testosterone -- rather his epitestosterone levels went down. Two things capable or reducing epitestosterone levels were alcohol and cortisone, two things that Landis allegedly took after Stage 16 when he was trailing by eight minutes. Cortisone wasn't usually allowed, however the Tour had specifically sanctioned Landis to use it for treatment on his hip. As for the alcohol, Landis said that after finishing Stage 16, he drank two beers and four shots of whiskey. "What would you have done?" Landis said when asked of his drinking. "Until yesterday, that was the worst day of my life."

Sports doctors, while not expressively vindicating Landis, agreed that there was something off about his test results. Had he taken a supplement specifically intended to increase his testosterone, he likely would have tested positive in an earlier stage. "I can't imagine how taking a single dose of an anabolioc steroid could impact performance in the sport of cycling," said respected physician Gary Wadler, noting that none of his other tests had an elevated ratio. "They need to be taken for many weeks to have an effect."

Nevertheless, Landis had been permanently labeled a cheater. It was a forgone conclusion that the Tour de France was one of the most chemically-enhanced sporting events out there; almost all of the winners from the previous ten tours had either tested positive for performance-enhancing drugs or were reported to take them. The fact that Landis had actually tested positive meant that he would never be given the benefit of the doubt.

In 2010, just three years after having the title stripped from him, Landis at last admitted that his 2006 had been chemically-enchanced, and that he had in fact been cheating during the race.