The 2011 Baseball Hall Of Fame Ballot: Jeff Bagwell, Larry Walker, And A Gaggle Of Steroid Enthusiasts

The 2011 Hall of Fame candidates won't be announced until November. Until then, we examine who's likely to appear on the ballot, whether they should and will be voted in, and other silliness.

Share All sharing options for: The 2011 Baseball Hall Of Fame Ballot: Jeff Bagwell, Larry Walker, And A Gaggle Of Steroid Enthusiasts

Baseball statistician Bill James (who should probably have a Hall of Fame plaque himself) devised a metric known as the Hall of Fame Career Standard, which is meant to indicate the likelihood of a given player entering the Hall of Fame. Interestingly enough, it doesn't necessarily reflect who is most deserving, but who is most likely -- the formula uses similarity scores to measure candidates against players who are already in the Hall.

A score of 50 indicates an "average Hall of Famer." For example, Babe Ruth scores a 79, while Joe Randa scores a 16. Of course, this formula is only concerned with raw statistics and not The Steroid Issue, fan sentiment, or any other non-statistical factor.

With that in mind, I'm going to judge next year's probable Hall of Fame ballot candidates by supplementing Mr. James' well-considered, scientific calculations with my own irrational pseudoscience. Also, if you happen to hold a discussion with someone who disagrees with these empirically correct assertions, I've included a series of methods to exact punishment for his or her wrong-headed opinions on the matter. Enjoy! 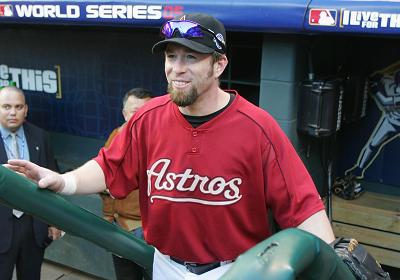 Bill James' Hall of Fame Career Standard: 59
Non-statistical variables: Bagwell is a one-team player (+4) and arguably the greatest-ever Houston Astro (+6). No player has ever worn an Astros cap on a Hall of Fame plaque (+5). He wore ugly sunglasses (-1). His last name could possibly be construed as a baseball reference (+3).
Re-calculated Hall of Fame Career Standard: 76
Personal take: Bagwell is the Hall of Fame-iest Hall of Famer who has ever Hall of Famed. He played until his shoulder was completely destroyed, and wanted to keep playing anyway. He hit (basically) 450 home runs while maintaining a career .408 on-base percentage. Only 11 other men in the history of baseball have done this. His strike-abbreviated 1994 season was great to the point of absurdity.
If an associate of yours says otherwise: Next time he or she wears a baseball cap, smack the top of his or her cap with the base of your fist so that you hit the metal button thing on the top. It will hurt! 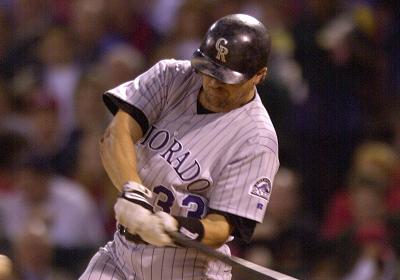 Bill James' Hall of Fame Career Standard: 58
Non-statistical variables: Walker played for the Expos (+1), but will probably not wear an Expos cap into the Hall (-1). He made a lot of his plate appearances in Coors Field (-2). He is one of the best players ever to be in a, "hahaha, remember that guy?" conversation (+/-3). His last name could possibly be construed as a baseball reference (+3).
Re-calculated Hall of Fame Career Standard: 59
Personal take: Walker was a big reason why the Expos won the 1994 N.L. East title (IT HAPPENED). He didn't hit 400 home runs, and thereby failed to satisfy our neurotic obsession with numerical milestones that are divisible by 100, but he managed an 140 OPS+ through the equivalent of 12 full seasons. He isn't quite the open-and-shut case that Bagwell is, but he should get a plaque.
If an associate of yours says otherwise: Prank him or her with a whoopee cushion. They can be purchased at most self-respecting dollar stores! 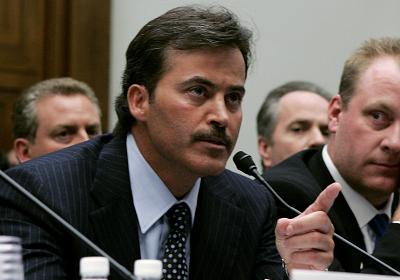 Bill James' Hall of Fame Career Standard: 57
Non-statistical variables: Thanks to his mustache, he looked 35 years old for 20 years (+/-2). He won a few Gold Gloves (+2). Viagra (+1)! Steroids (-1,000,056)! Managed to be more famous than notable children's musician Raffi (+5).
Re-calculated Hall of Fame Career Standard: -999,991.
Personal take:  In some distant year in the future, we will all abandon the perils of this miserable world full of right angles and solid objects in favor of amorphous blue globs in which we will float in the company of laptops that can run 150 Firefox tabs without slowing down, and our enlightened souls will not trifle with issues such as performance-enhancing drug use. Until then, the BBWAA will refuse to vote Palmeiro into the Hall of Fame, and we'll forever associate him with the above picture, in which he wags his finger and lies to politicians while Curt Schilling photobombs him.
If an associate of yours says otherwise: Hit the "random article" button on Wikipedia until you find a really long one, then send the link to him or her without reading it. Append the message, "wait for it..." 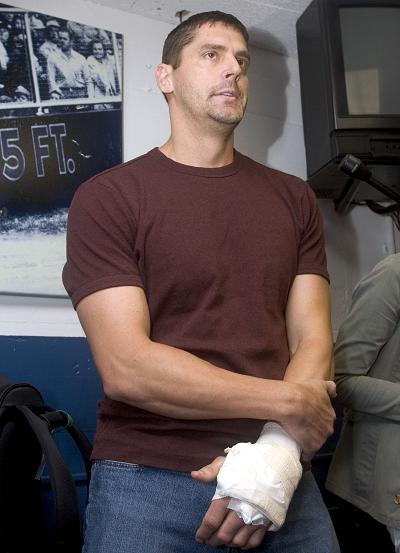 Bill James' Hall of Fame Career Standard: 41
Non-statistical variables: Tried valiantly (+4) but failed (-3) to rid the Earth of the oppressive concrete-wall menace by punching one. Might be more closely associated for the cast, shown above, than any jersey he wore (-3). Steroids (-1,000,056)!
Re-calculated Hall of Fame Career Standard: -1,000,015
Personal take:  Steroid use kills his Hall chances until the day, if it ever arrives, enough voters decide they don't care anymore. And even then, as much as I like Kevin Brown, I think he falls just short of Hall-worthy, and what's troubling is that voters may very well turn him down for the wrong reason: not enough wins. Judging the merits of a pitcher by his number of wins is like trying to tell time with a bucket of lemons, in that it is not even right twice a day.
If an associate of yours says otherwise: Ice this bro! But make sure he or she does not actually drink the antifreeze. 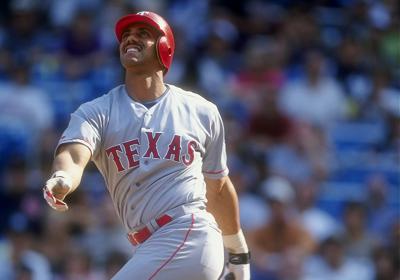 Bill James' Hall of Fame Career Standard: 40
Non-statistical variables: Played the majority of his career with the Rangers (+4). Is friends with a President (+1). Is friends with an unpopular President (-2). Allegedly, steroids (-4,448)!
Re-calculated Hall of Fame Career Standard: -4,405.
Personal take:  PED use shelves yet another Hall of Fame case for the foreseeable future. It's a shame, because Gonzalez had one of the game's all-time greatest batting stances.

If an associate of yours says otherwise: Next time he or she purchases a soft drink at a fast food establishment, pop all the bubbles on his or her lid. This will be terribly confusing. 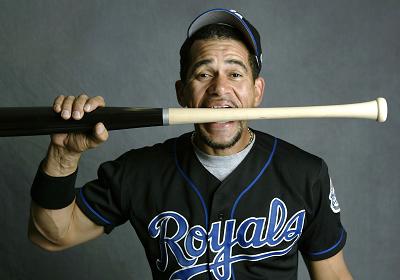 Bill James' Hall of Fame Career Standard: 30
Non-statistical variables: Above photo is whimsical (+1), but is a stale retread of Fatty Arbuckle Eats A Baseball (-1). Steroids (-1,000,056)! Is possibly the most 1988 player ever to play the game (+4).
Re-calculated Hall of Fame Career Standard: -1,000,022
Personal take:  It bums me out that we have to cast Santiago aside, because I think we all kind of liked him for reasons founded or otherwise. But he's a journeyman who was named in the Mitchell Report. Investigators searched his bindle and found PED paraphernalia, yes, but they also found a few bread crumbs abandoned by well-to-do townsfolk and a letter to his mother explaining why he jumped on that train back in 1923 which he will never mail. A flawed, but ultimately good, fellow, just like you or me.
If an associate of yours says otherwise: Find out his or her favorite show, learn the name of the main protagonist, replace the last name with the name of the show, and incessantly refer to the character as such. Ex. "Who's your favorite character from Lost? I think mine was probably John Lost."

And Finally, a Plea for Robb Nen 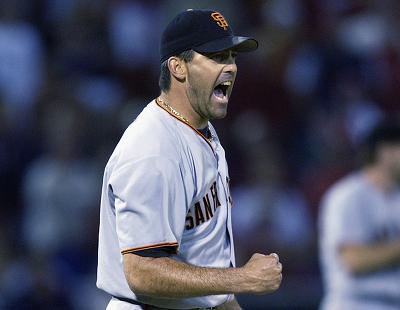 Robb Nen is not a shoo-in Hall of Famer by any means, but his story is a classic example of how inconsistent the Hall of Fame can be. Consider:

2. Robb Nen recorded 314 saves in 715 innings pitched. His career ERA+ was 139. In 2008, his first year of eligibility, he received two votes, good for 0.4% of the vote. This guaranteed that he would not appear on any other BBWAA Hall of Fame ballots.

Consider also that Nen pitched only 715 innings because he volunteered to pitch the life out of his arm for the Giants in 2002, a decision that helped them come within one win of a World Series championship, but that also ended his career at age 32. Giants (and Marlins) fans still love him to death.

I won't subscribe to the illusion that the Veteran's Committee would ever actually let him into the Hall, but it's a damn shame the book was shut on him so quickly.

Then again, his name is really weird. Nevermind.