Want To Meet President Obama? No? Just Going To Sit There Playing Madden 11?

Share All sharing options for: Want To Meet President Obama? No? Just Going To Sit There Playing Madden 11?

This is either really cool or kind of terrifying. Watch the Saints celebrate winning next season's Super Bowl, and you decide:

You get to meet President Barack Obama at the end of it, and that's awesome. Jokes aside, it's a no-brainer wrinkle from the Madden developers. But listen to some of this commentary from Gus Johnson...

"This team has only had eight playoff wins in their history, but these last two seasons, they proved it's quality over quantity. You simply can't qualify what this victory means to the city of New Orleans. A fantastic boost to give this town-tried community yet another reason to celebrate! Another reason to think that if you can dream it, and you're willing to give it everything you've got, then anything is possible."

Really? It's that detailed? Gus Johnson even used "qualify" instead of "quantify" by mistake, as if it was a live broadcast. I'm half-surprised there was no Treme reference. It culminates like so: 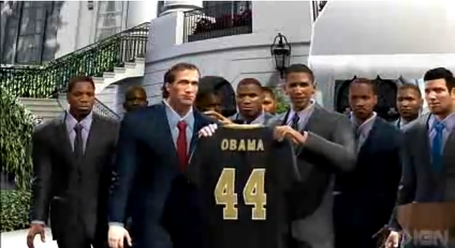 "This win has created a bond with these players that can never be broken, and it's taken them to places that they never could have imagined."

It's all very cool in this video. But we're approaching Uncanny Valley territory with Gus' New Orleans commentary. What does he say when Detroit wins the Super Bowl? "They had a dying economy. It was city known for its dreams deferred. But they had a winning spirit!"

It's not creepy now, but it could get creepy. And if I win the 2013 Super Bowl and my digital hero quarterback meets Sarah Palin on the White House lawn, I promise: the Playstation's going in the f**king gutter.