Bryce Brown Is Actually Leaving Tennessee This Time, According To His Cell Phone

Share All sharing options for: Bryce Brown Is Actually Leaving Tennessee This Time, According To His Cell Phone

You know, it's almost like recruiting kids who graduate high school already equipped with their own managers is an irredeemably terrible idea!  Bryce Brown, the '09 prequel to the exasperatingly drawn-out recruitment of Seantrel Henderson, he of outsized hype and 460 ill-gotten yards in 13 games, will not be returning to the Vols for his sophomore season, and you'll just never guess how his coaches found out. Via Tennessee beat writer/radio impresario Josh Ward's Twitter feed: 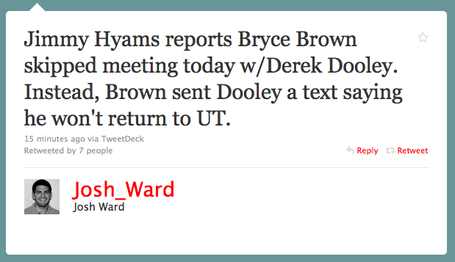 In retrospect, the staff should've known this kind of stunt was a real danger. Last week we managed to get through Derek Dooley's entire press conference at SEC Media Days without a single question regarding Brown's status, and that had to sting the kid. (We can blame this all, of course, on Brett Favre. Just look at the acceptable standards of needy behavior you're passing on to our nation's young athletes, you miserable sack of grizzle.) 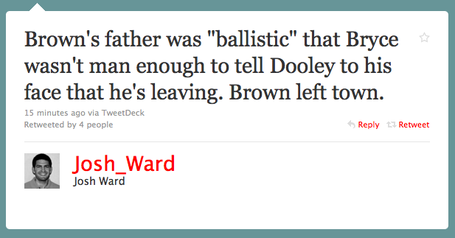 The latter part of this is believable, but why Brown's father would expect Bryce to stop playing Petulant Petulant Princess at this point after enabling his behavior for the past 18 months is anyone's guess. At any rate: Our long, long regional nightmare is over (... right?), and with any luck, this new Tennessee staff will shy away in the future from pursuing players whose on-field contributions are so directly tied up with their needs to be coddled.