Whether you liken Major League Soccer to a maturing adolescent (as I did in this series’ first post) or prefer less esoteric descriptions, MLS clearly plans to move out of its expansion phase. You can frame that move in terms of product quality or competitiveness, but the underlying assumption remains the same: better players, better teams, better and more attractive league. While proponents of parity may disagree with that assumption (and cringe as Los Angeles, New York and Seattle build-up), Major League Soccer has decided to build upon that premise.

As ESPN and Fox Sports continue to invest in European league commodities, MLS may have no choice but to improve. The league no longer exists in a relative vacuum, where only most dedicated fans were willing to allocate the resources necessary to follow the English, Spanish, Italian and German leagues.  Now on a given spring or fall weekend, a household’s cable box may to give them as many matches from La Liga on GolTV as they can get from MLS’s local and national outlets. The magic of the DV-R means people no longer have to bend their schedule around a trans-Atlantic time difference. With a stateside soccer fan able to sit down on Saturday afternoon and choose between a live MLS match or one of the many European matches he recorded earlier that day, each new soccer fan may be the subject of an implicit (though ultimately unnecessary) competition between Major League Soccer and Europe. 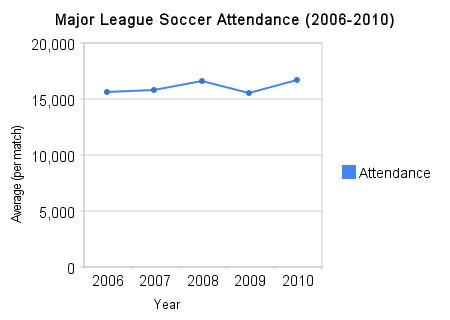 This is why, despite increases in attendance, Major League Soccer’s inability to get traction on television needs to be of greater concern. As long as people are buying tickets to matches, Major League Soccer is not going away, but unless enough people start tuning-in for a network can make money off the league, MLS will not get the television contract it needs to accelerate its growth. It is television money, after all, that makes the English Premier League the world’s standard and not a German Bundesliga with better stadia and crowds.  People in the stands can't watch commercials.  Now, despite more people pushing turnstiles, Major League Soccer is going to have to compete with the European leagues in the minds of television executives in order to get its first big television contract.

This brings us back to the issue of quality. As hinted by the popularity of the Premier League, the following for clubs like Barcelona and Real Madrid, as well as the record-setting television ratings for the 2010 World Cup, a television audience for soccer exists in the United States. Unfortunately for MLS, the audience that watched the World Cup and saw European-based players advertise those leagues’ quality were rarely reminded of our domestic league.  All six Major League Soccer players were out of the competition by the tournament’s quarterfinals.

That representation - just six players - is an astoundingly low number for a league that placed 21 players in the 1998 World Cup. Perhaps coincidentally (perhaps causally), that high mark coincides with the only period of international success for MLS clubs, with D.C. United and Los Angeles winning the CONCACAF Champions Cup in 1998 and 2000. For France 1998, two-and-a-half seasons after MLS’s inception, Major League Soccer averaged 1.75 World Cup players per franchise. Four years later, that number was down to 1.1 players per team, and although there was a small uptick for Germany 2006 (1.25), the six players representing Major League Soccer at South Africa 2010 reducing the average to 0.375 per team. By comparison, Mexico’s league stayed between 1.2 and 1.44 World Cup players contributed per club between 1998 and 2010.

Here, some representations of the raw numbers:

Comparing the Mexican league to Major League Soccer has become a trite and, for those of us who support MLS, often frustrating discussion, but as it concerns topics like Champions League results or World Cup players, it’s an inevitable comparison. Champions League features the leagues’ clubs competing head-to-head, while the World Cup compares two nations of near identical stature and accomplishment in the world’s game - two national teams still highly reliant on their domestic league to produce talent for the national team.

Even this year, when only six players (four from the United States) represented Major League Soccer in South Africa, 15 other players had played in MLS between the end of Germany 2006 and kickoff of the World Cup. Those 15 players include the likes of Ricardo Clark and Stuart Holden - players who left Major League Soccer in the months before the World Cup.1 In all, 17 players who represented the United States in South Africa spent some time in MLS during the 2010 World Cup cycle. Only six players on the U.S. men’s national team did not log time in MLS from 2006 (post-World Cup) to 2010. 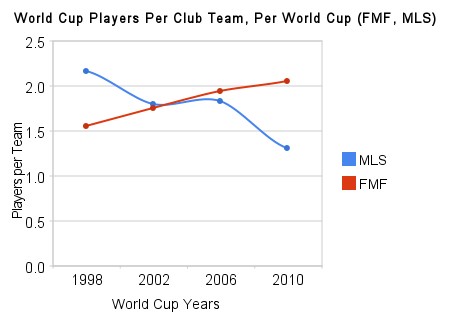 Major League Soccer and Federación Mexicana de Fútbol players per team at World Cups from 1998 to 2010.

While augmenting the six players directly representing Major League Soccer with the 15 MLS helped developed for South Africa helps paint a more accurate picture of the league’s contributions, that picture is only slightly more flattering when describing the state of the league. The total of 21 players, or 1.313 per franchise, is still far below the levels contributed for the 1998, 2002, and 2006 World Cups. When compared with the Mexican league, Major League Soccer is falling behind.  MLS contributed more players-per-team in 1998 and 2002 only to fall behind in 2006 and 2010. The gap in 2010, from Mexico’s 2.056 per team to MLS’s 1.313, is the largest since the inception of Major League Soccer.

The first questions to ask when faced with these numbers concern significance. Does this decline in World Cup representation mean anything, specifically as it concerns the quality of a league’s product? While looking at league representation can often be wildly deceiving (Greece had the seventh best representation in South Africa; North Korea, the 11th), using the data in narrow, controlled ways may be helpful. If you compare Major League Soccer to the similarly situated Mexican league or if you use the data to inform longitudinal assessments of a MLS’s evolution, the information can be useful.

At a minimum, the data forces us to entertain the idea that Major League Soccer may not be developing nor attracting2 World Cup-caliber players. While there is a debate to be had surrounding the value of the "World Cup" label (after all, none of Igor Akinfeev, Michael Essian nor Zlatan Ibrahimovic were at the World Cup), the curious coincidence of MLS franchises’ international success being correlated with World Cup representation hints that Major League Soccer needs better players.  Without quality players, it's difficult to make an argument advocating your league's quality.

If that is the conclusion, there's a relatively straight-forward solution: Major League Soccer needs to continue moving towards rules that will allow better players to come into the league.  While that may seem like an obvious statement, it has only been recently that the dialog surrounding the league's quality has acknowledged MLS may have, at some point since 2002, declined.  While the numbers speak to the extent of that decline, the path forward is the same regardless of your interpretation.  Major League Soccer wants and needs better players.

But in the interim, what about the players who are in MLS now - the next generation of internationals who are in a league that developed a historically low numbers of players for this year’s World Cup? In the next post: Major League Soccer players who are turning into examples of this development conundrum.

With the exception of attendance data featured in this post's first chart, all data was acquired by hand and could very well be wrong. The notes were compiled here. If you have questions or corrections, feel free to email the author.

1 - The total of 15 players outside MLS who had played in the league during the World Cup cycle ends up being a bit of an outlier because of the late cycle exodus of players like Clark, Holden, Cuautémoc Blanco, and Amado Guevara, moves which may have been effected (to varying degrees) by the status of the league’s Collective Bargaining Agreement. There is no similar exodus prior to the 1998, 2002, or 2006 World Cups, nor are their similar instances within the Mexican league.
2 - See note 1.