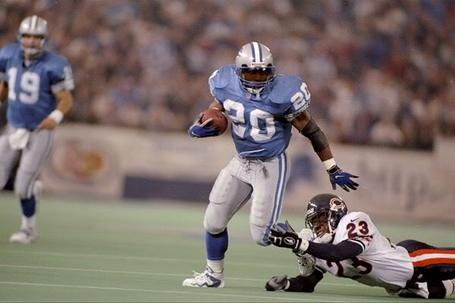 Barry Sanders was well on his way to shattering Walter Payton's rushing record. At age 30, he could have ascended the ranks of the greatest players of all time -- he compiled statistics in his first nine years that were on par with those of Jim Brown, widely regarded as the best NFL player ever. He even brought prosperity to one of the most notoriously awful sports franchises in America: the Detroit Lions.

So you can imagine what a shock it was when on this day in 1999, Barry Sanders formally announced his retirement from the game of football. When the media tried to get in touch with him, they couldn't, as he was already on a plane to Europe. "I don't know the right way to retire," he said. "This is just my way of doing it."

Many were skeptical that Barry's retirement was some sort of hold-out and that eventually he would come back. He had six years left on his contract and was only 30. He had to come back, why wouldn't he? But Sanders didn't come back, ever, and he left the Lions without their star player. Detroit made the playoffs in 1999 but would struggle mightily over the next decade, even suffering an 0-16 season in 2008.

In his 2003 autobiography, Barry Sanders revealed an explanation for his abrupt departure. Sanders was unhappy with the Lions' downward spiral over the years, particularly the disassembling of the '91 team that nearly made it to the Super Bowl. "When they got rid of Kevin Glover," he wrote, "they convinced me that their goal wasn't anywhere close to being about winning games. I didn't realize it at the time, but part of me left with him, just as part of me left with those other guys I mentioned."

In the end, the losing culture of the Lions and their bungling management took its toll on Sanders. "I didn't see what good there was in hanging around when the organization wasn't trying to put together a winning team. Looking at what other teams in our division had done... I didn't think we were as serious about winning as our competitors." He said there were tears in his eyes on the last day of the 1998 season, a 19-10 loss to the Bengals. "I knew it was over."

It was a match made in hell if ever there was one. Larry Brown, the current coach of the Detroit Pistons, leaves his job and becomes the head coach of the New York Knicks. The Pistons were one of the elite contenders in the NBA; they had just made it to the Finals and won it all just two years earlier. But the opportunity to guide the NBA's most important team, the New York Knicks, back into contention and out of their malaise was too tempting for Brown to pass up -- especially since the Knicks gave him a gargantuan five-year, $50 million deal.

Brown would only last one year as he struggled to mesh with the roster, and was fired after accumulating the worst record in the NBA. Brown entered the Knicks job as one of the most wanted coaches in the NBA. But following his venture in New York, his reputation as the ultimate team-fixer wavered, and he was only able to latch onto the Charlotte Bobcats in 2008.