Nick Saban compared sports agents unfavorably to pimps. Urban Meyer called them predators. Yet for most of the country, Reggie Bush's infamy will far outlive that of any of his money men. This week it's the ACC's turn to go to bat with the media, and its coaches have their own ideas about flipping that script: 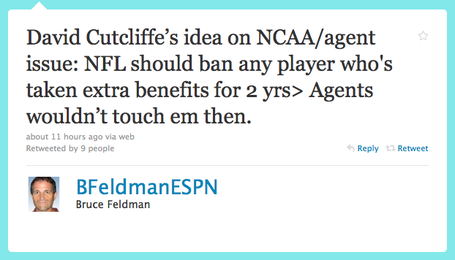 It's certainly an interesting idea. Would that really work that way, though? Or would it just provide extra motivation for nefarious agents to keep things hush-hush? Is there any proposed scenario so far that doesn't end with the construction of some sort of underground railroad of chicanery? Something tells me we're thinking in the wrong direction here, and not just because there's no way Duke football players have an agent problem.