How Good Will LeBron James And The Miami Heat Be In 2011? Hint: Very Good

Pat Riley's attempt at putting together an NBA super team in Miami may work out better than some have predicted.

Share All sharing options for: How Good Will LeBron James And The Miami Heat Be In 2011? Hint: Very Good

It's time to accept that the Miami Heat are going to be very, very good next season.

First came denial: Even if LeBron James takes his talents to South Beach, they'll only be able to surround their vaunted trio with free agent flotsam! It takes more than three players to win a title, right? Then anger. Oh yes, Cleveland fans had anger covered. After that, bargaining -- as in, can we buy off refs to sabotage them in the playoffs? Depression was next. Fans wouldn't be able to taunt James about his lack of finger-wear much longer. And finally, acceptance (but hey, the super-team era will be great for rivalries, so we've got that going for us, which is nice!).

So just how good, exactly, will the refurbished Miami Heat be? Somewhere between exceptionally and historically good. Perhaps even unprecedented. Before they'd finished filling their roster, the consensus was that Miami would win 60-something odd games, likely on the lower end of that spectrum. After all, outside of the Heat's holy trinity of Wade, James and Bosh, they'd mostly be fielding replacement-level players, right (replacement-level players is euphemistic stats-speak for D-Leaguers and other assorted scrubs)?

Not quite. Once again, Pat Riley outsmarted us all. By completing sign-and-trade deals for LeBron and Bosh rather than just outright signing them, Riley was able to convince them to take lower first-year salaries because he could tack on a sixth year to the end of their deals. This financial legerdemain engineered enough cap room for the Heat to add two solid rotation players in Mike Miller and Udonis Haslem. Add in decent-ish role players like holdover Mario Chalmers and returnees James Jones and Carlos Arroyo, and suddenly the Heat boast a crop of actual NBA players aside from their Big Three.

That's a substantial improvement over what everyone assumed they'd be able to do. According to ESPN's resident stats guru John Hollinger, barring any late-season coasting, this now-completed Miami squad figures to win somewhere in the neighborhood of 68 games. Within shouting distance of the immortal '96 Bulls. 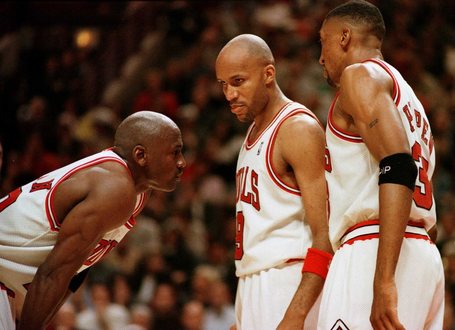 Ah, but what if one of the Big Three gets injured? Isn't a top-heavy team like Miami's more vulnerable to injuries than a deeper team? Well, not really. In these expansion-diluted days, few teams have the wherewithal to withstand losing their marquee players. Like the Cavs last season. Minus LeBron, they would have figured to win roughly 31 less games -- from the No. 1 seed to the lottery. Of course, this isn't entirely accurate. Without LeBron, other players would have gotten more touches, and likely would have produced a bit more themselves, depending on their skill curves (which relates how efficient a player is to how much he uses the ball). Still, they would have won significantly fewer games, and probably missed the playoffs. It's conceivable that on a loaded roster (let's say the Lakers), losing a superstar (Kobe Bryant) wouldn't be quite as calamitous as the numbers would suggest if other good players (Pau Gasol) got the touches they "deserve". And in a small enough sample size, the sans-superstar squad might even play better. But most teams aren't the Lakers. Most teams would suddenly be asking role players to create their own shots...which they aren't very good at, by definition, since they're role players.

Fortunately for the Heat, they have two other legit superstars to carry the team should one of them be sidelined. That luxury actually makes them less susceptible to having their season derailed due to injury, although they'd have to adjust their expectations a good 25 games or so, pro-rated for however long one of their Big Three is out. A quintet of Mario Chalmers, Mike Miller, LeBron James, Udonis Haslem and Chris Bosh -- assuming the injury-prone Dwyane Wade was shelved for an extended period -- could certainly win more than a few games, and keep the Heat competitive in the East. 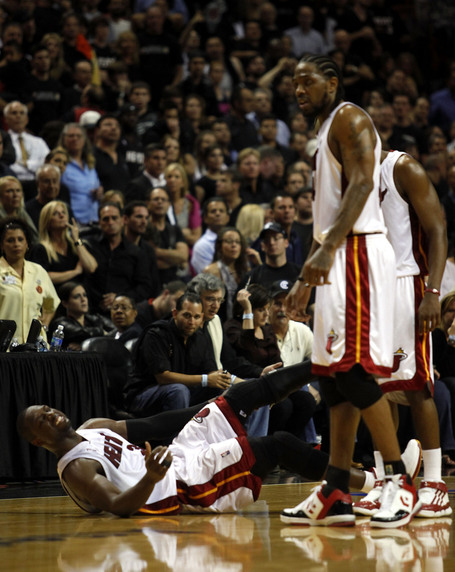 What about the playoffs though? The past few seasons have shown us that regular-season juggernauts (particularly LeBron-driven ones) can run into a buzzsaw in the second season. So do the reconfigured Heat have any glaring roster holes that the league's other elite teams could exploit? Perhaps. Neither Wade nor James is much better than a streak-shooter from deep, and Bosh doesn't really have the bulk to match up with fives down low, leaving those two areas question marks for Miami. It's possible, however unlikely, that opponents could take advantage of one or both of these weaknesses and send the Heat back to South Beach for an early summer.

Let's take a look at how Miami shapes up in both area, outside of their Big Three.

Landing Miller was a coup for Miami. Not quite a "landing Wade, James and Bosh" coup, but a coup nonetheless. Miller connected on 48 per cent of his three-point attempts last season for the Wizards and is a career 41 per cent shooter from deep. He's the perfect court-stretching antidote to the innumerable double teams Wade and James figure to attract.

Jones is the next best threat from three-point land, with a career mark of 40 per cent. Not bad for a seventh-man type. Throw in recent addition Eddie House, whose 39 per cent shooting from distance is more than respectable, and the Heat have a trio of capable long-distance threats. After him...things get a bit dicey. Both Arroyo and Chalmers are average at best marksmen. Chalmers actually shot a respectable 37 per cent as a rookie before regressing to a 31 per cent mark during an all-around abysmal sophomore campaign. Arroyo, meanwhile, is a career 31 per cent shooter from behind the arc. In other words, don't be surprised if Miami elects to use LeBron as a point-forward in crunch time, and sits their lead guards.

Three designated shooters in Miller,Jones and House should be enough, but if one of them gets cold in the playoffs, that's not much margin of error for Riley's Spoelstra's team against the rest of the league's elite.

Say hello the real Achilles heel of the 2010 Miami Heat. Outside of Haslem, it's an eclectic mix of has-beens and unproven young players down low. Basically what you'd expect when all you can offer is the league minimum. Luckily for Miami, scoring centers are almost an extinct breed in today's NBA. Realistically, only two teams figure to have the talent to capitalize on the Heat's questionable big man rotation: the Magic and Lakers.

Dwight Howard already demonstrated two years ago in the Eastern Conference finals that Ilgauskas is little more than an obstacle cone for him, racing around Big Z en route to an absurd series. The rest of the Heats' bigs don't figure to fare much better either. Still, unless the Magic can pull off a trade for Chris Paul, Orlando probably doesn't have the firepower to beat out the Heat in a seven-game series -- unless, of course, Rashard Lewis rediscovers his game and Vince Carter stops being Vince Carter.

Which leaves the Lakers. Assuming Andrew Bynum would be healthy for a hypothetical Finals showdown (granted, far from a sure thing), the Lakers possess the type of gargantuan front line that could punish Miami. Not just on post-ups either. The Lakers would attack the glass on the offensive end, like they did to the Kendrick Perkins-less Celtics in Game 7 of last year's Finals. That, and superior depth just might give the Lakers the oh-so-slight edge, at least for this year. 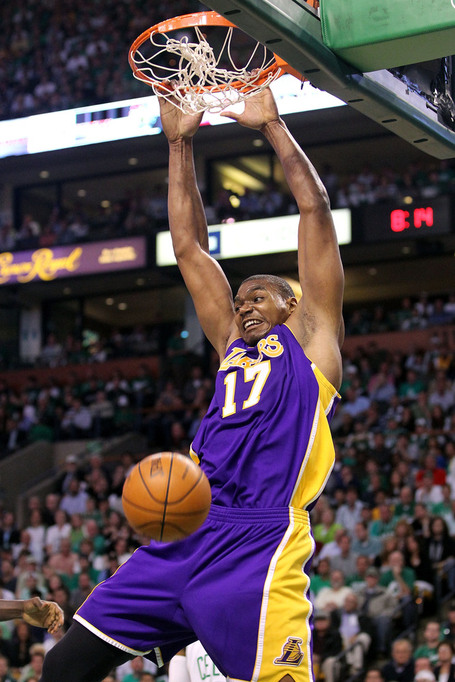 So yes, the good news is that the Heat are far from shoo-ins to take home the NBA title. The bad news: you'll probably have to become a de facto Kobe/Lakers fan if you want to see Miami's dynastic ambitions thwarted.