Terrell Owens Is Just Like You And Me, In That He Cannot Spell 'Cincinnati'

Share All sharing options for: Terrell Owens Is Just Like You And Me, In That He Cannot Spell 'Cincinnati'

Here is a tweet from Terrell Owens, who is sort of the Terrell Owens of football, two days after he signed with the Cincinnati Bengals.

This is not, as you (might) know, how Cincinnati is spelled. In fairness to T.O., Cincinnati might be the most frequently-misspelled big city in America, but this tweet demonstrates how unfamiliar Mr. Owens is with his new football home.

Upon signing with the Bengals, Owens was asked to compile a report detailing every single thing he knew about Cincinnati. Here it is. Again, don't judge too harshly, because after all, 85% of the country knows absolutely nothing about Cincinnati.

What I Know About Cincinatti [sic]

Ah, Cincinatti [sic]! This city is the proud home of things I would look up on Wikipedia if I were allowed. This grand old town sits right in America's heartland: 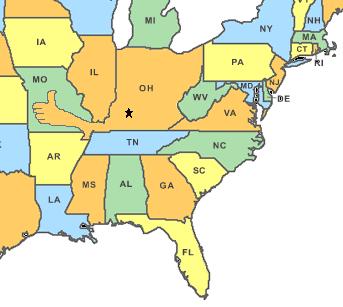 Cincinatti [sic] was founded in 1821 as a trading post by frontiersman John Cincinatti [sic]. Townsfolk traded 19th century stuff such as furs, pelts, and hunted game. There was a river you could ford, but it made more sense to just wait for the water to get lower. People were always dying of cholera; it was total bulls***.

It's a city perhaps best known for its Big Red Machine. Yankees manager Joe McCarthy had it tried for treason.

The city's cuisine is a real treat. For the best... burger in town, check out, um, Jimmy Jack Burgerton's House Of Burgers. They have the, uh, famous Cincinatti [sic] burger. If you eat the whole thing, it's free!

When Giles Corey was pressed to death during the Salem Witch Trials, he simply said, "more weight," and then he died. It is a harrowing lesson for us all. [Editor's note: Bengals officials ruled that these 29 words had nothing to do with Cincinnati. As a consequence, $29,000 was deducted from his per-word signing bonus.]

Without ever having been to Cincinatti [sic], I'm going to guess that it's basically Kansas City. [Editor's note: he is right!]