The Goonies 'R' Coming To Lakewood! [Well, one of them]

Share All sharing options for: The Goonies 'R' Coming To Lakewood! [Well, one of them]

Earlier in the season, I reported on the Twilight night being held by the Fresno Grizzlies - an event which drew much scorn from my SB Nation colleagues. They were much more amenable to the promotion being held by the Lakewood BlueClaws of the South Atlantic League tonight - they'll be celebrating Goonies Night, to mark the 25th anniversary of the classic kids' film.

Jeff Cohen, the actor who played Chunk, will be present to sign autographs and pose for pictures. He will also by judging a Truffle Shuffle Contest held between innings - if you have to ask what that is, just go and watch the movie. In addition, the home team's players and coaches will wear Goonies jerseys, which will be auctioned off after the game to benefit the team's charities. And they're pretty spiffy, I have to say: a picture is after the jump. 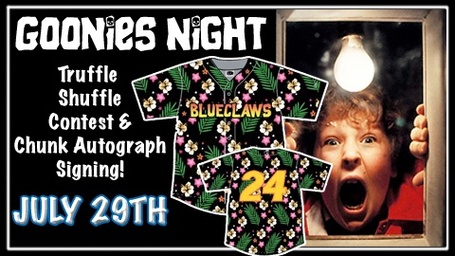 While perhaps a bit lurid, they are certainly an improvement on the Team Werewolf jerseys inflicted on the Grizzlies after a fan vote. I could actually see myself wearing the above, for instance, the next time I go to a Jimmy Buffett concert. I have to confess, I am not exactly a huge devotee of the film: unlike my wife (who remains a fan), I didn't see it when growing up, and watching it in my late thirties... Not quite the same impact.

Still, this seems like a promotion done right, rather than the shameless cash-grab of the Grizzlies, and I applaud the BlueClaws for their effort. Now, if some minor-league team would only celebrate the 25th anniversary of Re-Animator, I would fly across the country for that.