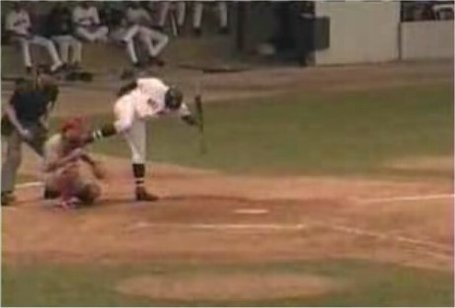 At the 1939 World's Fair, Joe Sprinz of the San Francisco Seals, a minor league team, attempted to set a world record in one of the craziest stunts ever seen at a ballpark. 800 feet from the ground, baseballs were to be thrown from the inside of a blimp until Joe could at last grab a hold of one. The first four balls sailed nowhere close to him, but on attempt No. 5, a ball streamed right at him at more than 130 MPH.

Sprinz got in position, readied himself, and was able to get the ball in his glove. But the baseball was traveling at such momentum that it carried his glove right into his face, damaging his nose, fracturing his jaw, sending five of his teeth flying, and knocking him unconscious. Sprinz would spend the next two months in the hospital and, adding insult to injury, failed to hold on to the ball, losing the world record. "My lips looked like hamburger," Sprinz later recalled.

Izzy Alcantara of the AAA Pawtucket Red Sox is known for being in one of the most unique scuffles in baseball history. In a July game in 2001, Alcantara had multiple brushback pitches thrown at him. Knowing that he was going to charge the pitcher's mound, as customary in baseball brawls, Alcantara did something original: he attacked the catcher first.

Before moving an inch towards the mound, Alcantara stepped back and karate-kicked the catcher out of nowhere. He then charged the mound but quickly realized that he was surrounded by opponents. Appearing unsure of who to hit first, Izzy pivoted for a second before being wrestled to the ground by a member of the opposing team. He was suspended six games and kept out of the AAA All-Star Game.

The NBA owners approve the Vancouver Grizzlies to move to Memphis, Tennessee -- just six years after the Grizzlies joined the NBA as an expansion team. Attendance for Grizzlies games had been tepid from the start, and with a roster as bad as it gets, the Grizz saw what little fans they had spurn the team completely. The NBA's experiment in Vancouver, which many considered the best city in all of North America, was an immense failure that many people still look back on. With the move, the Toronto Raptors became the sole NBA team in Canada.

There were several reasons, besides the financial aspect, why the team was forced to migrate to Memphis. For some, the blame rested on the decision to give Bryant "Big Country" Reeves a $65 million contract. Not only was Reeves not a star, he was perpetually injured and wound up collecting the final years of his contract from the comfort of his sofa. However, many people blamed the fate of the Grizzlies on Steve Francis, who the Grizzlies had drafted in 1999 with the No. 2 pick. Francis refused to play in Canada and was forced to be dealt to the Houston Rockets two months later. Francis went on to become a star in Houston and deprived the Grizzlies from having a player the could market and build around.

In Memphis, the Grizzlies spent several seasons playing at the Memphis Pyramid before a new stadium was constructed. Even though they were now in the smallest market in the league, the team experienced a modest improvement in attendance -- mainly because they were now in a city where basketball was a big deal. Vancouver showed the NBA that you can't just put a team anywhere; the city has to clamor for one in order for it to work.