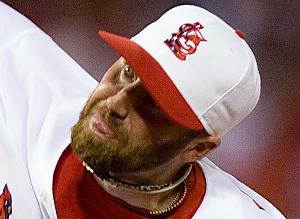 Chill hat, bro. Chill pitch face, bro. Did you know that this gentleman, Jason Motte, is violating federal law by wearing this cap? You may know where I'm going with this: using the American flag in this way, in full or in part, is prohibited by the U.S. flag code, and pretty explicitly, too.

Here is Chapter 4, Title 1, Section 8-J of the United States Code, which is permanent federal law. Emphasis is mine:

No part of the flag should ever be used as a costume or athletic uniform. However, a flag patch may be affixed to the uniform of military personnel, firemen, policemen, and members of patriotic organizations. The flag represents a living country and is itself considered a living thing. Therefore, the lapel flag pin being a replica, should be worn on the left lapel near the heart.

Now, does this bother you? I can't even pretend to be bothered by it. Furthermore, there is no enforceable penalty for offending this particular code. It's just a cautionary example of the ostensible consequences of over-representing the flag. When these players doff their caps during the national anthem, they will be removing one flag for the sake of respecting another flag! Flags everywhere! Flags all the time! Flags!