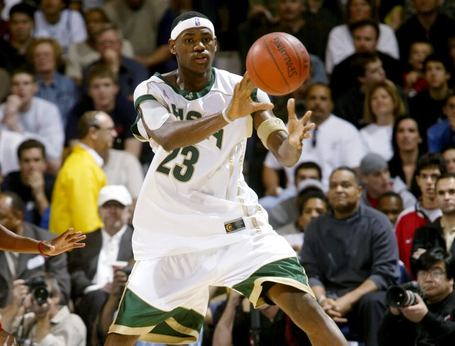 On July 30th, 1975, union leader Jimmy Hoffa went missing shortly after leaving a restaurant in Bloomfield Township, Michigan. Months and years of intense searching would ensue, but no one could ever find him and he was eventually declared dead. The general presumption was that Hoffa was done in by the Mafia, who were afraid that he would rat out their connection with the Teamsters.

Hoffa's body was never found, and his sudden disappearance -- coupled with the grizzly assumption of what happened to him -- quickly entered into the American pop culture. Although most agreed that he was killed by the mob, there many different rumors over where his remains could possibly be. One of the darkest and most prominent theories was that Hoffa was killed, dismembered and stuffed in oil drum, and that the drum was buried underneath Giants Stadium -- home of the New York Jets and Giants.

The theory came to light in a 1989 story by Playboy magazine in which several ex-mobsters claimed that after Hoffa was murdered, his remains were buried under Giants Stadium, which was undergoing construction. Although searches of the stadium were done and no corpse was ever found, the rumor still persisted -- and will likely continue to persist as long as Hoffa remains missing.

Houston Astros pitcher J.R. Richard was throwing some light tosses to teammate Wilbur Howard when he collapsed to the ground, having suffered a stroke. For weeks, Richard had been experiencing fatigue in his throwing arm, but when he went to the doctors, he was told that there was nothing wrong with him. And when he began leaving games earlier than usual, fans and writers alike characterized him as lazy and unmotivated. But now the doctors were telling a different story: Richard had a blood clot in his neck that was cutting off the circulation to his body.

Richard underwent intensive surgery and had the blockage removed in time to prevent any life-threatening side effects. When he awoke, he found that he was unable to speak and was completely paralyzed in the left side of his body. He recovered enough to attempt a comeback just one year later, but it fell short, and he was forced to give up his career as a major leaguer. At 30 years old, he had pitched his last game.

It was a tragic story, made even worse because he very well could have been a Hall of Famer. Through seven-and-a-half seasons, J.R. had compiled a 107-71 record with a 3.15 ERA. He had led the National League in strikeouts the previous two seasons, led the league in ERA the year before, and had won at least 18 games the previous four years. When he collapsed on the field, Richard was a serious candidate for the Cy Young Award; he was 10-4 with a 1.90 ERA and had even started for the NL in the All-Star Game.

Richard's life got even harder. A business scam and two divorces drained whatever money he had left, and in 1995, it was reported that the man once recognized as the best strikeout pitcher in the game was living in the crack of a highway underpass. But J.R. never lost faith and was eventually able to buy an apartment when his MLB pension kicked in. He later found a job at an asphalt company and was able to put the pieces of his life back together, something that he attributed to his faith in god.

"Being homeless means you're broke and you have no place to stay," he told the Houston Post in 1995. "It doesn't mean you ever give up hope. I'm on the way back. With God, I know I'll make it."

It was on this day in 1993 that Philadelphia 76ers owner Harold Katz signed off on what might be the worst contract in NBA history. Katz inked Shawn Bradley, a 7-foot-6 center who they had selected with the No. 2 pick in the 1993 draft, to an eight-year deal worth $44.2 million -- making Bradley even richer than Shaquille O'Neal.

Paying $44 million to an untested rookie was bad enough, but it looks even worse considering who it was going to. Shawn Bradley had played just one year at Brigham University before spending two years as a Mormon missionary in Australia. Those who knew him said that his game wasn't great and that he didn't have the drive or aggressiveness or even the body to make it in the league. But Katz was confident that he had struck gold. In a league dominated by height, Bradley was the tallest player in NBA history. Katz pleaded with the fans to give a few years for the Bradley experiment to pan out.

It didn't take long, however, for even Katz to realize he had made a mistake. Bradley had laundry list of issues, though two in particular stood out immediately. The first was that Bradley was as skinny as a rail; at a meager 245 pounds, he often weighed less than players who were a full foot shorter than him. The Sixers tried desperately to muscle him up -- even ordering him to consume 7,000 calories a day -- yet when it was all said and done, Bradley somehow managed to weigh even less.

The other issue was that he simply didn't have an offensive scoring presence. In theory, Bradley was so tall that he should have had an astronomical field goal percentage. Bradley was so skinny, however, they he was rarely able to post up his defenders and only once in his 12-year career did he shoot over 50% for a season. His best year came in 1997, when he averaged 14.6 points and 8.7 rebounds per game.

Just two years after drafting him, the 76ers traded Bradley to the New Jersey Nets for Derrick Coleman -- himself a player who never quite lived up to expectations. Bradley was later traded to Dallas, where he spent the remaining eight-and-a-half years of his career. His lifetime regular season averages: 8.1 PPG, 6.3 RPG, 0.7 APG, 2.5 BPG.

For years and years, the debate raged whether or not high school kids should be allowed to enter the NBA draft. Many great players had come straight out of high school, among them Kobe Bryant, Tracy McGrady, Jermaine O'Neal, Kevin Garnett, Amare Stoudemire, Dwight Howard, and LeBron James. Some argued that it was detrimental for the league to have so many players without college experience, and that it was setting a bad precedent for younger kids. Others argued that as long as teams continued to draft high schoolers, and as long 18 year-olds could skip college to fight in a war, there was no reason why they shouldn't be allowed to enter the league and make a living.

Ultimately, the league sided with argument A. Addressing the issue that had become such a hot topic, the NBA and the Players Association agreed on a new collective bargaining agreement, raising the age restriction to 19 years old. Andrew Bynum, who had been drafted in 2005 at 17 years and eight months old, would be locked as the youngest player ever drafted.

The move was quickly criticized by those who saw it as unconstitutional, though the decision had benefits for both the NBA and the NCAA. No longer would the NBA be attacked for luring teens away from an education, and no longer would high school prodigies spurn the college ranks to jump straight to the pros. Many saw the decision as a direct reaction to the Pacers-Pistons brawl, which had damaged the NBA's reputation among casual fans.

It didn't take long for people to find faults with the "one-and-done" rule. While it forced the great high school prodigies to play at the college level, which would have never happened before, it did little to force an education on the players, who only had to complete six courses in order to play a full year of basketball. Many universities that pursued the one-and-done freshmen went to extreme lengths to get them on their teams, such as USC coach Tim Floyd, who delivered $1,000 to O.J. Mayo as an enticement to play on his roster. Brandon Jennings, another highly-touted high school prospect, was the first to take an alternative approach; rather than spending a year in college, he signed with a professional Italian basketball team for one year, making $1.65 million.

In 2011, the NBA and the players' union will vote on a new C.B.A. It's expected that the one-and-done rule will be altered in some way, though it's unknown how it will go down.

The barring of high school draft picks wasn't the only innovation in the 2005 collective bargaining agreement. Also included was a provision granting every NBA team a one-time amnesty clause, allowing them to permanently eviscerate one contract from their roster.

The clause seemed almost too perfect for a team like the New York Knicks, who would now be able to waive Allan Houston, their one-time franchise player. Houston had missed most of the previous year with a knee injury, was due to make $40 million over the next two years, and was 34 years old -- the amnesty clause was so convenient for the Knicks that it was christened the "Allan Houston Rule" by people in the media.

But the title was a misnomer, as the Knicks chose to waive power forward Jerome Williams instead. New York believed that Houston still had some life left in him and that dispelling Williams would be the better business decision; Houston's knees didn't recover and he never played in another game. In the end, the Knicks saved $21.3 million by cutting Williams when they could have saved $40 million by cutting Houston.