Spencer Hall's Sports Meme Power Rankings list the top 10 most-discussed sports stories on the Internet and beyond each week. These are determined by a rigorous process that incorporates a complex formula involving none of your business.

1. UP LIKE THE STRAINING NEEDLE OF A BATHROOM SCALE: Fat guys show up to NFL training camp. Don't be hard on Albert Haynesworth: do you know how hard it is to lose weight when you have $21 million just sitting in the bank? Your sense of scale is already skewed because you're anorexic at 300 pounds, much less when you're at your 370 pound cuddle-bear weight.  Add in more money than you can ever think about spending, and suddenly the difference between one cheeseburger and eight is merely academic.

Clearly, if Washington wants Haynesworth to pass any kind of conditioning test, they're going to have to take a page from the Chris Rock Logic Book. Rock posited that if you wanted to end shootings, you should make bullets cost ten thousand dollars a piece, because then you'd really have to want to kill a person before you just willy-nilly started unloading a clip full of ammo at them.

The way for the 'Skins to recoup their money and/or get their investment back off Haynesworth follows existing Snyder business practices. Buy every fast-food restaurant within walking distance of Ashburn's training facility. (This won't be many, and Albert won't be walking too far for anything at this weight.) Then open a Johnny Rockets (a Dan Snyder operation, of course) on the sideline and charge $250,000 for a cheeseburger. Extras will be $50,000 a piece; fries, a mere $20,000 an order.

Salads will follow standard pricing for Redskins' concessions, and will be sold for a reasonable $45 each. See the incentives here? Haynesworth either repays his bonus by eating at the company store, or he slims down and gives it back on the field. Either way the Redskins win, though they will never have a fat lineman nicknamed "Cheeseburger," and that is a sad, sad thing indeed.

(This is your mandatory reminder that Daniel Snyder is horrible at life.)

2. UP LIKE JIM BUNNING'S BLOOD PRESSURE WHEN THEM DANGED KIDS GO A-RACIN' IN THEIR JALOPIES AT AN UNSAFE SPEED DOWN HIS STREET: Stephen Strasburg missed a start this week, thus upsetting hundreds of young men in expensive fitted caps in the DC area this week. He also drew intelligent, measured commentary from Jim Bunning, a pitcher who in his day was so epically talented Philly fans only referred to him as "that overpaid piece of redneck crap," which in translation is quite a compliment from what Philly fans usually call their athletes.

"Five hundred twenty starts, I never refused the ball," Bunning, a Kentucky senator who hurled a perfect game in 1964 and struck out 2,855 batters in his major league career, told POLITICO. "What a joke!" Bunning had taken an interest in Strasburg, who like the Kentucky senator is a fireball-hurling right-hander. The senator has seen the Nationals ace four times and was at the ballpark Tuesday night, he said. But he clearly didn’t like what he saw — or rather didn’t see — when the youngster didn’t take the mound. "My arm!" Bunning sarcastically cried as he pretended to clutch his shoulder in the Capitol’s Statuary Hall.

To be fair, Bunning may have been grabbing his arm because he was having a stroke. As a United States Senator, a lack of bloodflow to the brain would not be an issue with any of his duties, and as a real man who would pitch with a shoulder injury unlike that nancy-boy Strasburg he would continue unaffected. Oh, if only you could bravely grind through the meaningless season to take part in an epic collapse someday as young Jim Bunning once did, Stephen Strasburg! Someday, if you're lucky, you'll get just that chance.*

*You play for the Nationals right now, and will never get that chance until you are purchased by the Yankees, Red Sox, Dodgers, or Cubs. Wait: just the first three there, actually, if we're talking about the championship thing. 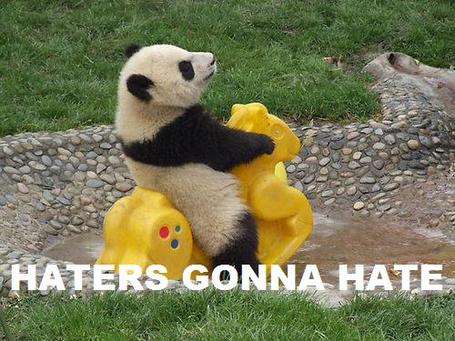 3. UP LIKE THE SWING OF A PICKAXE: North Korea officials give us all terrible and wonderful ideas. North Korea may have actually sent their disgraced football coach off into the world of manual labor, thus prompting the list of coaches that I personally have wanted to see condemned to a life of hard labor.

4. Jon Gruden (if only to take him off college football coaching prospective hires)

7.  Jerry Sloan (because he would like it, and that would be perversely funny)

8.  Rex Ryan (If only to watch his wily escape with his band of rugged, charming outcasts in tow)

9. Steve Spurrier (to see if he can rig up a golf course from common construction tools

10. Pete Carroll ( to see if one can "Win Forever" when working in a dangerously unregulated coal mine)

4. UP LIKE THE CHANCES OF CARSON PALMER CURLING UP IN A DARK ROOM, PUTTING ON AN ALBUM BY THE FRAY, AND JUST CRYING FOR A FEW HOURS THIS SEASON: Terrell Owens comes to Cincinatti. Cinncinatti. Cinci--whatever, dude. 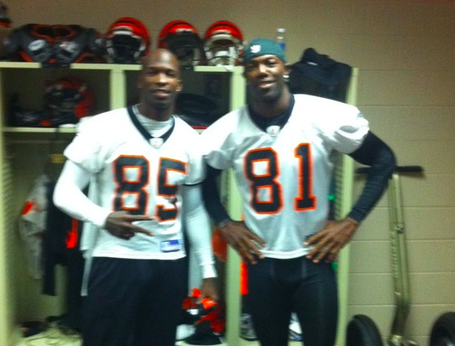 You know Chad Ochocinco is singing this in his head.

Sometimes I feel like I don't have a partner

is an invisible gorilla

This much madness in this picture, and also a Carson Palmer cardiac event. J.T. O'Sullivan, prepare thyself well.

5. UP LIKE A THROWN MUG OF BEER TOWARD A HEAT JERSEY: This week in the ever-expanding wake of LeBron James Taking His Talents and Vodka-Wasting Associates to Miami. Numerous events occurred in this category this week. For one, a Cleveland fan actually showed up to an Indians game with a James Heat jersey on, and was pelted with beer and insults until he left. Cleveland Frowns caught up with him, and he regrets nothing.

Wendy also told me that Bellamy had a four-inch scar on the back of his head from having been mugged and pistol-whipped somewhere in Sandusky. When I asked him why he wore the jersey, he told me that he'd live down in Florida if he could figure out a way to make it happen, and understands why LeBron would do the same. "[Eff] the haters," he said.

REAL TALK, son. You could just buy a plane ticket to Orlando like half the other people in Ohio, but the eighty dollar James jersey and baseball tickets had to come first, Mr. Bellamy. We understand.

Also in LeBron news, he went to Vegas, and ESPN reporter was there, and when words describing 25-year-old millionaires assing about Sin City appeared on ESPN.com they disappeared. ESPN.com's management insisted this was a decision made without outside influences, and fluffy muffins of skepticism were served all around here and elsewhere. BTW, I always announce myself as a pseudojournalist wherever I go, just in case I want to take a picture of you and put funny things on it with MS Paint. It's important to have standards and rules in this profession.

(Oh, and hey, look at the New York Times getting in on this.)

6. UP LIKE THE EYEBROWS OF A PAINTER WHO WILL SOON BE COMMISSIONED TO MAKE ANOTHER CENTAUR PAINTING: Alex Rodriguez is stuck on 599 home runs.  Alex Rodriguez is waiting to hit his 600th home run, and in the meantime is struggling to connect with the ball. Most people use rags or towels to wipe off the bat, but I'm not a professional, A-Rod. You do what you have to do.

7. MLS ALL-STARS VALIANTLY SURRENDER A MERE FIVE GOALS TO MANCHESTER UNITED'S PRESEASON TEAM. The ratings were impressive for the MLS All-Star Game, even if the results rated somewhere between "slaughtered with a cannon that shoots pitchforks" and "set ablaze and thrown into a wood-chipper filled with stinging flies" for the MLS All-Stars. Manchester United won 5-2, scored goals with embarrassing ease, and did it all with Sir Alex Ferguson's scrub team. Scrubs for Man U, by the way, do this kind of business with their eyes closed:

You could make a pun on Cleverley's name HAHAHAHHA MULTIPLE STAB WOUNDS TO THE FACE. That first one is a warning, headline writers.

8. UP LIKE [SIMILE DELETED FOR OUTRAGEOUS SEXUAL CONTENT]: The Karen Sypher trial. Don't look directly at the trial. Instead, let's allow Kentucky Sports Radio and their Twitter filter the disgusting details of Rick Pitino's personal life for us, shall we?

Defense attorney asks how could she have become pregnant then if he did not ejaculate. Pitino testifies, "I did, down my leg."less than a minute ago via Echofon

May the god of your choice forgive me for this, and let's just move on now before anyone else uses the phrase "I did, down my leg" again.

9. UP LIKE A PAIR OF UNDERPANTS ASCENDING TO THE HEAVENS: Tim Tebow signs underwear contract, then real contract. He shall present underwear worthy of those who do not wish to be decadent he-sluts; and then he shall avoid accusations of a holdout by signing a modestly luxurious contract with Denver. He shall deposit $8.7 mil into the bank guaranteed, and it shall be good.

/realizes this isn't a dream

Gone from the Meme Rankings: Everything but Brett Favre, since it's been a while for the Rankings, and because Brett Favre will be running over armadillos with his truck on his farm when he's 87 and still hemming and hawing about returning to the Vikings.