Share All sharing options for: Ocho-Cinco And Ocho-Uno: It Begins... 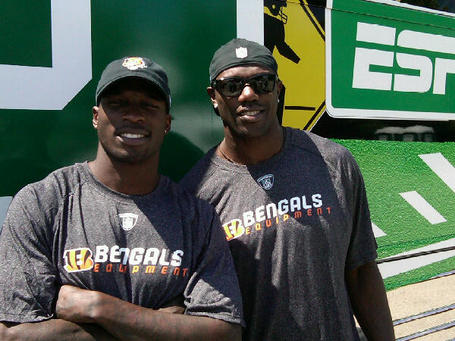 I wasn't sure how to feel about this new union of Terrell Owens and Chad Ochocinco in Cincinnati. On the one hand, it's sort of unprecedented as a football experiment. On the other, it's the sort of story that could get old before we even reach Week 1. Like, "Did you hear?! TO is calling himself OchoUno now because he's so zany! And so is Chad! They are so, so funny together!"

The photo above is a perfect litmus test for how you feel about the new era in sports journalism.

If you're excited by the thought of TO and Ochocinco and curious to see how the union will play out on the field, then you are one of the lucky ones. You probably don't even notice when sports stories become oversaturated and we're treated to the same, trite talking points hour after hour during the sports news cycle. To you, those are just two captivating receivers, not attention whores destined to make a spectacle of themselves at every turn.

If you dread the idea of TO and Ochocinco together in the same locker room, rehearsing touchdown dances, staging banter and fake-laughing their way to the top story on SportsCenter once-a-week for the next 20 weeks... Well, it's a wonder you're still watching sports at all. But I can't totally blame you. Especially with the way the media works these days--quoting Twitter on live television, broadcasting clips from some player's uStream--there's definitely potential for this story to get really annoying, really quickly.

But the truth is, we're all forgetting the most important part of this story: Antonio Bryant is going to f'ing DEADLY as the third receiver on that team. If Carson Palmer can stay upright... Look out.