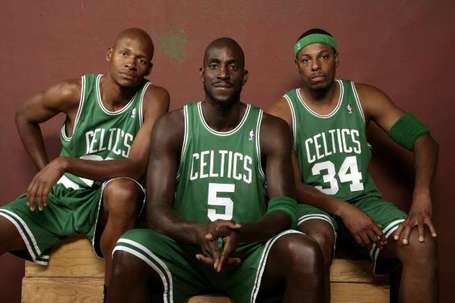 With a win over the Milwaukee Brewers, Nolan Ryan becomes the first and only pitcher to reach 300 wins in the 1990's. Ryan had one of the most diverse legacies of any major league pitcher. Besides winning 324 games, he struck out a major league record 5,714 batters, threw seven no-hitters, 12 one-hitters, 18 two-hitters, and he played in 27 seasons from 1966 to 1993 -- tying Cap Anson for the most seasons in a major league career.

But while his accomplishments were phenomenal, he was also up there in several bad categories as well. With 292 losses, he was the first pitcher to challenge Cy Young's record of 316, and he retired having given up more walks and wild pitches than anyone in history. Ultimately the positive outlasted the negative, and Ryan was elected to the Hall of Fame in 1999 with 98.79% of the votes.

The anticipation for the Celtics season was instant. In the span of one week, the Celtics' odds of winning the title went from 100-1 to 5-1. By opening day, Boston had sold out 94% of their home tickets for the season. And with the additions of James Posey, Eddie House, and P.J. Brown, the Celtics did not disappoint. They began the season 8-0 and never looked back, finishing with a league-best 66 wins.

Boston struggled to maintain their excellence in the postseason. Both their first and second round series with the Hawks and Cavaliers went seven games, and they even trailed in the third round to the Detroit Pistons. Ray Allen was atrocious the first two and half rounds of the playoffs, but he got it going late in the Conference Finals. He then played great in the NBA Finals, helping the Celtics beat the L.A. Lakers and win their first title in over two decades.

The Celtics' acquisition of a future Hall of Famer in Kevin Garnett was the best thing to happen to the NBA in a while. They were coming a disastorous season that included a horribly-rated Spurs-Cavaliers Finals and the revelation that one of their officials was fixing games. Getting the attention off of the negative, and back onto the glory of a Celtics-Lakers Finals, was just what the doctor ordered.

In a three-way trade with the Pittsburgh Pirates, the Boston Red Sox trade Manny Ramirez to the Los Angeles Dodgers for fellow outfielder Jason Bay. A few other players were swapped, with the Pirates ending up with four minor league prospects. Manny had been the best hitter on the Red Sox by miles, but his constantly aggravating behavior caused a riff in the clubhouse.

Just a few days earlier, he told ESPN Deportes, "The Red Sox don't deserve a player like me. During my years here, I've seen how they [the Red Sox] have mistreated other great players when they didn't want them to try to turn the fans against them. The Red Sox did the same with guys like Nomar Garciaparra and Pedro Martinez, and now they do the same with me."

"The day he realized that they were not going to sign him to an extension was the day he said, 'Uncle. I'm done,'" former teammate Curt Schilling said in September of that year. "The fact of the matter was, you looked at a guy who, at the end of the day, when you look back on the history, never, ever cared about any of us."

Had Ramirez not been 36 years old, he would have fetched one of the largest contracts in MLB history. Instead, he and agent Scott Boras had to "settle" with a two-year $45 million extension with the Dodgers.