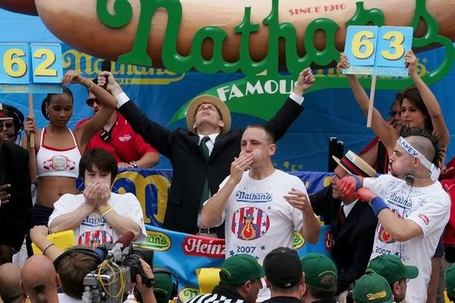 (Chestnut and Kobayashi in the final minute. Photo by Chris McGrath, Getty Images)

Pitching against the Boston Red Sox on the fourth of July, at Yankee Stadium, with Richard Nixon in attendance, Dave Righetti of the New York Yankees throws a no-hitter. He was the first left-hander to throw a no-no at Yankee Stadium and the first Yankee to pitch one since 1956, when Don Larsen threw a perfect game in the World Series.

"I was determined the first two or three innings to set a pattern and take the bats out of their hands," said the 24 year-old Righetti, who struck out nine and allowed four walks. "I didn't have that great control, that's why I walked some people. But I had effective wildness.

The win gave Righetti a 10-3 record on the season, however he finished the year on a bit of a slump and was relocated to the bullpen in 1985 -- replacing Goose Gossage, who had left New York to join the San Diego Padres. Righetti started just 13 games of the next 11 years and wracked up 252 career saves, most of them with the Yankees. 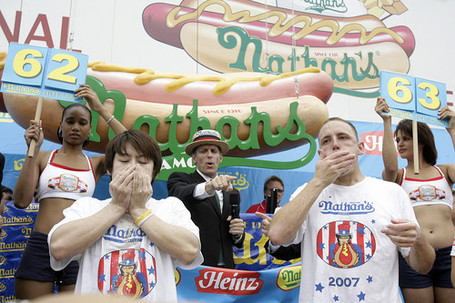 Can competitive eating be considered a sport? That depends -- when you see a 400-pound guy riding in one of those scooters at the mall, do you say, "Damn, that guy is athletic"? For most of us the answer is no. So then why do we get behind the Nathan's Hot Dog Eating Contest? Easy: because it's the most American thing we've got. We watch fellow Americans gorge themselves on the most American of foods, hot dogs, and the winner gets to be draped in the American flag.

But a dark storm had fallen on this illustrious competition. An outsider from the land of the rising sun named Takeru Kobayashi had stolen the championship mantle away from America for six consecutive years. We had already suffered defeats in the World Baseball Classic, basketball championships, and Winter Olympics -- now we were losing in an eating contest. If the fattest country in the world couldn't produce a single person to out-eat a skinny Japanese guy, what hope did we have for humanity?

Luckily for us, an apply-named man named Joey Chestnut rose to the occasion. He had recently broken Kobayashi's world-record with 59.5 hot dogs during the Nathan's qualifier. Chestnut had eaten 52 hot dogs the previous two Nathans competitions, and many were thinking that this was his year. The Chestnut bandwagon got even bigger on June 25th when Kobayashi announced that he had an arthritic jaw. The severity of his injury was to be disputed, as Kobayashi showed up on July 4th in top form.

The two combatants battled until the very end; both eclipsed the previous hot dog eating record with minutes to go. With 12 seconds left, the score was knotted at 62-62. Chestnut and Kobayashi tried to cram in as much mush as their mouths would allow. Kobayashi, desperately trying to cling to his hot dog dynasty, vomited when his esophagus couldn't handle anymore. In one of the grossest moments in television history, Kobayashi tried to corral the puke still in his hands back into his mouth. ESPN decided to edit the "reversal" (as it’s referred to in hot dog terms) out of the competition's replays, for obvious reasons.

When the scorers came back from deliberation, they confirmed the hopes and dreams of millions of kids: Chestnut had won, 66-63. Kobayashi was gracious in his defeat to the new champion. Kobayashi was still considered the superior eater -- he did win it six times after all. Proving that his victory was no fluke, Chestnut won it again the following two years. 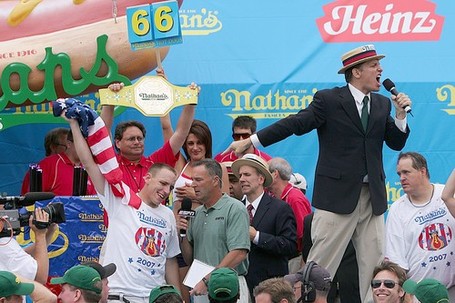 ESPN didn't cover the Hot Dog Eating Contest in a Snakes On A Plane haha-it's-stupid-but-we’re-rolling-with-it way. No, they were treating this heavy. It led off SportsCenter and analysts were brought on to dissect Chestnut's eating performance. The play-by-play announcer took it more seriously than anyone, producing some wonderful quotes during the telecast:

"This will be the greatest moment in the history of American sports."

"This… this could be what this country needs to get back on the right track: the yellow belt coming home to America."

My favorite: "If he can hang on, google 'hero' tomorrow -- you're going to get Abe Lincoln, Neil Armstrong, Taylor Hicks, and Joey Chestnut."

Former NFL quarterback Steve McNair is found shot to death in a rented apartment, as is 20 year-old Sahel Kazemi, who was later identified as McNair's girlfriend. McNair was 36 years and had only ceased playing two seasons ago. It was determined from the evidence that it was Kazemi who shot McNair and that she had then turned the gun on herself.

"Air" McNair was extremely popular in Tennessee, where he spent the bulk of his 13-year career. He was described by teammates and coaches as one of the toughest competitors in the league, partly because he had persevered through several difficult injuries, some of which had robbed the air portion of his game. He was a three-time Pro Bowler and shared the MVP in 2003 with Peyton Manning. His best moment came in Super Bowl XXXIV, when he had the Titans within a single yard of tying the game in the closing seconds. He spent the final two years of his career with the Baltimore Ravens.

While McNair's accolades had him remembered fondly on the field, the sordid details of his life off the field could not be ignored. McNair's personal life was so chaotic that not only was he cheating on his wife, of whom he had two kids with, with a 20 year-old woman, the police believed that a possible motivation for Kezemi was that McNair was cheating on her as well.

"It's kind of like disbelief, like somebody was playing a cruel April Fools' joke," said former teammate Kevin Dyson. "It's just so surreal.

"He played the game the way it was supposed to be played, not for the glory, not for the press, not for the money, but because he was a true competitor and he wanted to prove a lot of people wrong," said Frank Wycheck. "It was all about the love of the game and I think after his career he was a peace with where he was at with his family, his sons and what he was giving back to the community. It is a shame for this to happen."