Monday's Stage 2 of the 2010 Tour de France, a 201 km (124.9 mile) ride in Belgium, from Brussels to Spa, is an up-and-down course, featuring a series of nine quick, steep climbs. It's "a tribute to the Ardennes classics," writes SB Nation's cycling blog, Podium Cafe, in their Stage 2 preview.

It's a bumpy ride, though none of the climbs are especially long. The course is likely difficult enough to eliminate the pure sprinters like Mark Cavendish and the terrain may slow the chase sufficiently to allow a break to survive to the finish. Riders like Jérôme Pineau and his team-mate Sylvain Chavanel could find stage glory from a break. If the race comes back together, sprinters like Oscar Freire and Thor Hushovd who climb better than many of their rivals will have the advantage.

Podium Cafe highlights Jérôme Pineau from team Quick Step, but also look for Alberto Contador to make a move to better his position -- he won't want to fall too far behind in the Tour before it reaches his playground, the mountains.

For everything you could need for today's stage, Podium Cafe has you covered, with a live thread that already has hundreds of comments, a stage profile and a course map (via Bikemap): 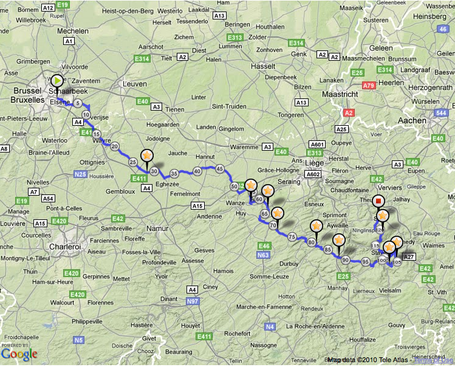