What If 'Bron And Wade Are Playing A Big Practical Joke On Chris Bosh?

Share All sharing options for: What If 'Bron And Wade Are Playing A Big Practical Joke On Chris Bosh?

With all this free agency talk, it's been difficult to keep track of who's really holding the cards here. Different superstars linked to different teams, sign-and-trades being tossed about, "superteams" being dreamed up by pundits.

Over the weekend, ESPN's Chad Ford verbalized a popular theory:

...LeBron and Wade may be on hold, because it might be that for them to decide where they are going, first they need for Chris Bosh to decide what he wants to do.

And maybe that's true. But does anyone else think it's completely ridiculous that Chris Bosh is being included in this discussion as a peer of 'Bron and Wade? To that end, there are a lot of "dream" scenarios that could play out over the next few weeks of a free agency, after the jump, we break down the real dream scenario.

My friend Tim raised this possibility at a cookout yesterday... What if LeBron James and Dwyane Wade have been playing Bosh all along, secretly planning to sign with the Bulls, leaving Bosh out in the cold? Wouldn't that be awesome? 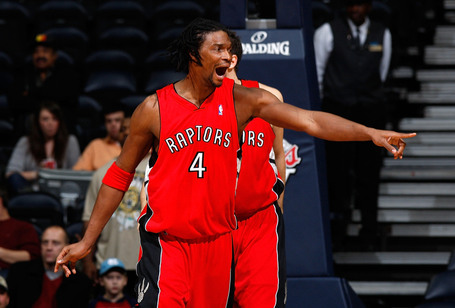 If Bosh—who once said "I don't want to be mentioned as an addition to a team, I want to be mentioned as the guy that people want to center their team around"—actually had a team centered around him? Let's say Wade and LeBron go to the Bulls, and Bosh goes to Miami. Just take a second to imagine that team. Bosh, Michael Beasley, Mario Chalmers, Joel Anthony. That's a 40-win team right there. Maybe 35. With $100 million Chris Bosh at the center of it!

All of which is to say, he may be the key to all these superstars' free agency, but if he is, it's highly ironic. Bosh is a whole lot closer to Joe Johnson than he is LeBron James or Dwyane Wade.

So, you know, here's to hoping James and Wade get tired of waiting on Bosh's decision, and decide to make ole Chris the centerpiece down in Miami. Admit it: It'd be a pretty great joke.